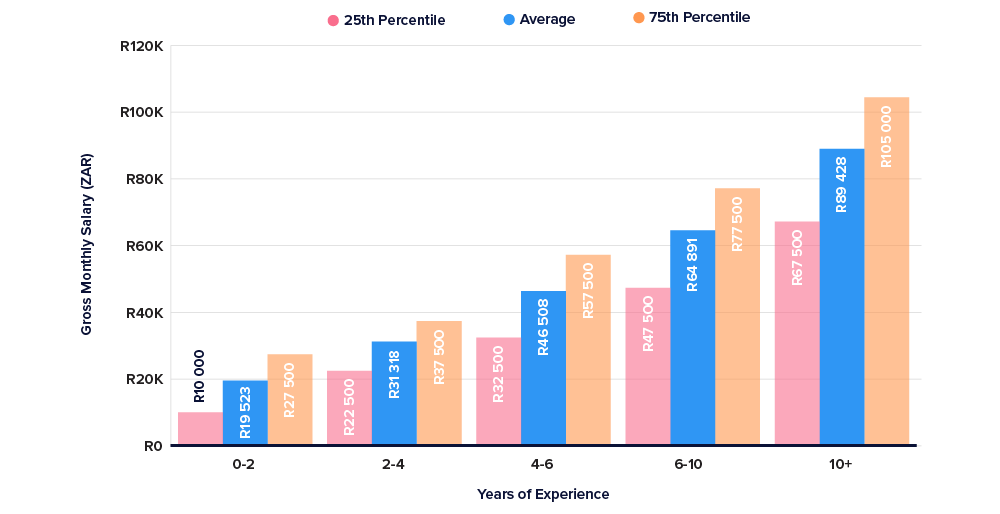 The average starting salary for an entry-level Python developer with fewer than two years of experience is R19,523 per month. This puts salaries for junior Python developers in South Africa on par with PHP and JavaScript.

After two years in the profession, average salaries for junior Python developers increase by 60.4% to R31,318.

This picture looks quite similar for junior Java developers because while they are still finding their feet in the early stages of their careers, developers tend to change jobs a lot more. This gives them a chance to negotiate a higher market-related salary than the inflationary increases developers can expect if they stay with one company.

Mid-level Python developers see their average salaries rise by 48.5% to R46,508 at the 4-6 years experience mark.

Salary growth slows down for Python developers at the senior level, but that’s not to say that there’s no growth.

Senior Python developers with 6-10 years of experience can still look forward to a solid 39.5% salary increase to an average of R64,891.

Average salaries for senior Python developers rise by 37.8% to R89,428 after ten years.

Why the slow-down? In addition to senior developers generally changing jobs less often than juniors, companies also have to start thinking about salary increases as a developer’s salary level becomes “more expensive”.

Entry-level Flask developers can expect an average starting salary of R16,071 per month. This rises to R28,500 after they gain two years of experience. Flask developers are earning 8% less than the average Python developer by this stage of their careers.

Flask developers receive the most significant salary increase of their careers after they’ve been in the profession for four years:

Average salaries for mid-level Flask developers with 4-6 years of experience surge by 88.6% to an average of R52,891. This gives them a 13.7% earnings advantage over the average Python developer.

However, their salary growth more than halves once they become seniors. Senior Flask developers with 6-10 years of experience can expect a 34.6%pay rise to an average of R71,207.

After ten years, salaries for senior Flask developers increase by an additional 30.1%, giving them an average monthly salary of R86,698. However, by the time they pass the ten-year experience mark, their salary advantage over the average senior Python developer has shrunk to 3.6%. 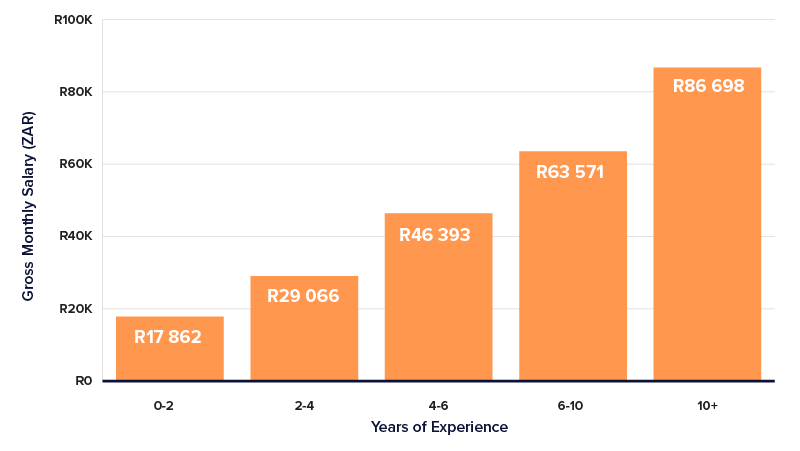 After two years in the profession, they experience the highest salary increase of their careers:

Django developers with 2-4 years of experience receive a 62.7% pay rise for an average monthly salary of R29,066.

Once they reach the 4-6 years experience milestone, their average salaries increase by 59.6% to R46,393. At this stage of their careers, Django developers have closed the gap on the intermediate Python developers.

Despite their slow down in salary growth, senior Django developers earn approximately 9.8% more than the average senior Python developer in South Africa.

Average salaries are single data points and only one part of a bigger story. It’s expected that many respondents may earn significantly more or significantly less than these averages. However, by mapping the average salaries for different experience levels, we hope to map underlying trends.

It’s also important to remember that every individual’s context is different. At the end of the day, salary is a personal conversation that should take place between employee and employer.

Looking for your next opportunity as a Python developer? Check out OfferZen.