1 in 8 South African developers listed PHP as a primary programming language making it the sixth most widely used in the country. Here’s an overview of average PHP developer salaries by experience, what full stack PHP developers can expect to earn at each stage of their careers, and average salaries for the most-used PHP framework, Laravel. 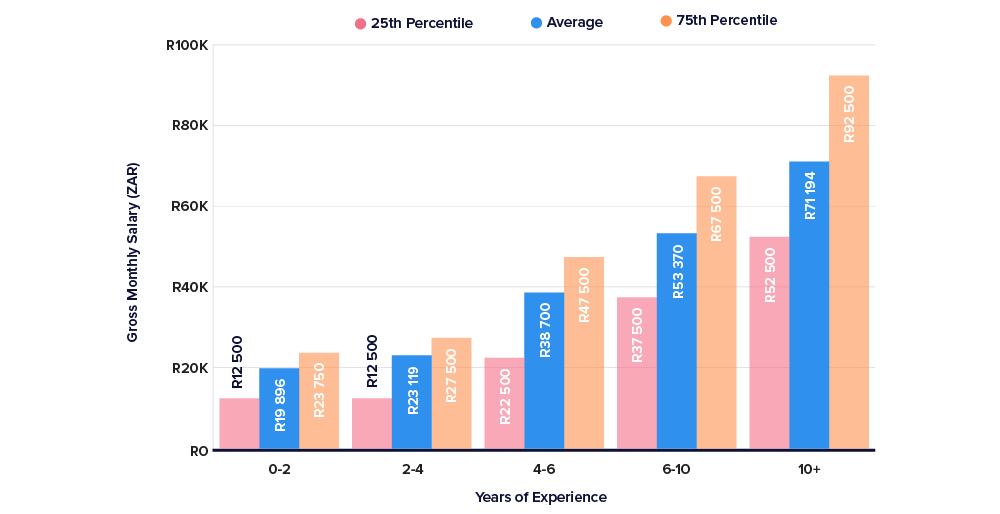 Average salaries for entry-level PHP developers in South Africa start at R19 896 and increase by 13.9% to R23 119 after being in the profession for two years.

PHP developers in South Africa experience the most significant pay increase of their careers once they reach the mid-career level:

Salaries for PHP developers with 4-6 years of experience increase by 40.3% to an average of R38 700 per month.

Why do average salaries rise so quickly during these stages of their careers?

Developers tend to change jobs more while finding their feet during the early stages of their careers, allowing them to negotiate a market-related salary higher than the inflationary increases developers can expect if they stay with one company.

However, salary growth for PHP developers begins to slow once they become seniors.

A developer’s primary programming language and experience are not the only factors affecting their salaries. Their role and frameworks also affect what they can expect to earn across their careers.

Laravel is the most-used framework among PHP developers in South Africa. Here we’ll look at what Laravel developers can expect to make at each stage of their careers and how that compares to the average PHP developer.

Salaries for entry-level Laravel developers start at R18 571, or 6.7% less than the average PHP developer. However, they rise by 12.8% to an average of R21 302 after two years in the profession.

Laravel developers get their most significant salary increase at the 4-6 years’ experience level:

By this stage of their careers, they have overtaken the average PHP developer.

Senior Laravel developers can still expect a 31% increase to an average of R58 841 after they pass the six-year mark, 10.3% higher than the average PHP developer. Average salaries rise by 21.4% to R74 856 after ten years of experience.

Full stack developers are the second highest-earning group among South African developers in 2022, after backend developers. Here, we’ll see what full stack PHP developers earn at each stage of their careers.

Full stack PHP developers can expect the most considerable pay increase of their careers after they pass the four years of experience mark:

Salaries for full stack PHP developers with six years of experience increase 41.2%, giving them an average salary of R50 122. Once they pass the 10-year mark, salaries rise by an additional 38.2% to R69 306.

Average salaries are single data points and only one part of a bigger story. It’s expected that many respondents may earn significantly more or less than these averages. However, we hope to understand the underlying trends by mapping the average salaries for different experience levels.

These salary averages should not be used to estimate what your actual salary will or should be.