Our 2022 State of the Software Developer Nation data shows that full stack developers are the second-highest earning group behind backend developers. Here’s an overview of average full stack salaries at junior, mid and senior levels and for three of their most-used frameworks, React, Node.js, and Angular. 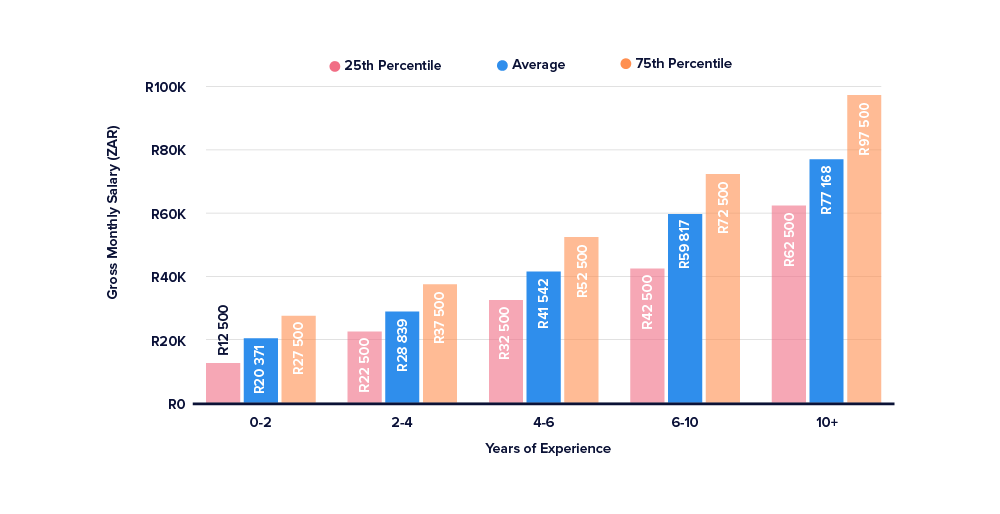 Entry-level salaries for full stack developers start at an average of R20 371 and quickly rise by 41.6% to R28 839 after coding for two years.

Why the rapid increase? While finding their feet during the early stages of their career, developers tend to change jobs more frequently. This gives them a chance to negotiate a market-related salary higher than the inflationary increases they can expect if they stay with one company.

Mid-level full stack developers with 4-6 years of experience can expect a 44% pay rise, giving them an average monthly salary of R41 542.

Unlike their backend and frontend counterparts, salary growth for full stack developers remains steady when they first become seniors.

Senior full stack developers with 6-10 years of experience see their salaries increase by 44% to R59 817. However, this slows to a 29% increase once they pass the ten-year mark, giving them an average monthly salary of R77 168.

A developer’s role and experience are not the only factors affecting their salaries. The frameworks they master can also impact what they expect to earn across their careers.

A developer’s choice of framework is another factor impacting their earning potential across their careers. Here, we’ll look at average salaries for three of the most used frameworks by full stack developers in South Africa: Node.js, React, and Angular. 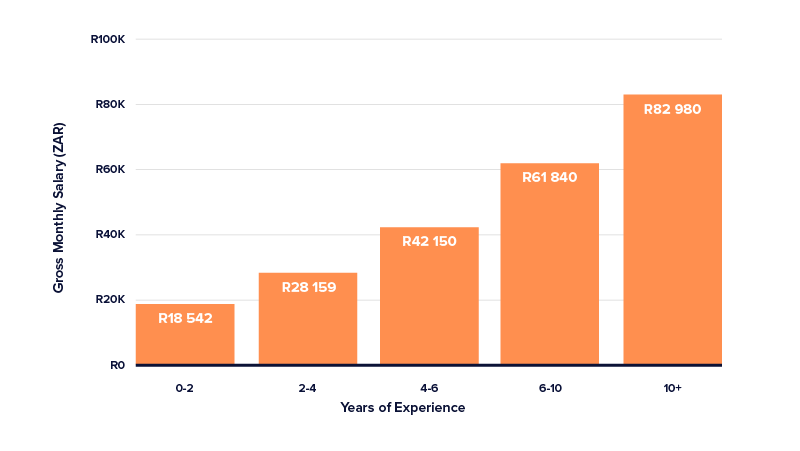 Node.js is the second most used framework by South African full stack developers.

Average salaries for entry-level Node.js developers start at R18 542, 9% less than the average entry-level full stack developer. However, their salaries rise by 51.9% to R28 159 after two years in the profession.

After four years of experience, salaries increased 49.7% to R42 150. By this stage of their careers, full stack Node.js developers close the gap on the average full stack developer.

React is another widely used framework by full stack developers in South Africa.

Salaries for junior full stack React developers with fewer than two years of experience begin at R20 469. This rises by 47.6% to R30 211 once they pass the two-year level.

After four years in the profession, average salaries increase by 48.3% to R44 794, giving them an 8% advantage over the average mid-level full stack developer.

Salary growth for full stack React developers begins to slow down once they become seniors:

Average salaries for senior full stack React developers with 6-10 years of experience increase by 39.1% to R62 330.

This slow down in salary growth also narrows the gap between them and average senior full stack developers to 3.5%. 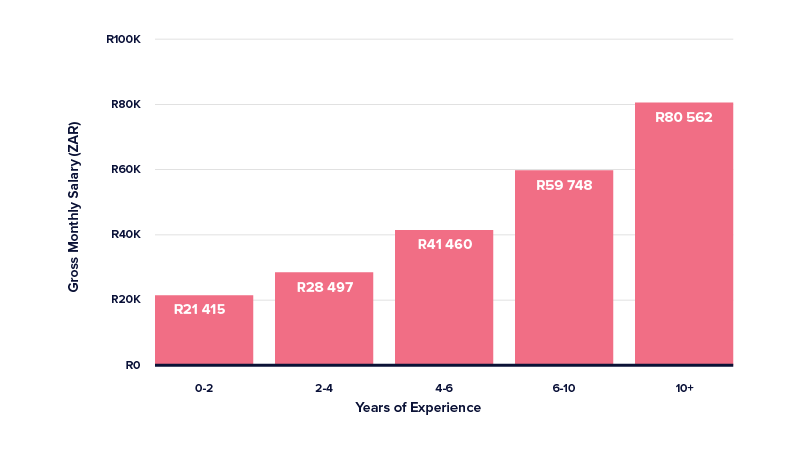 Average salaries increase by 33% to R28 497 once they pass the two-year mark.

Full stack Angular developers see the most significant increase of their careers at the 4-6 years of experience milestone:

Full stack Angular developers with at least four years of experience see their average salaries rise by 45.5% to R41 460.

Despite the significant pay rise, their advantage over full stack developers has closed.

Senior full stack Angular developers with six years of experience can look forward to a 44.1% increase giving them an average monthly salary of R59 748, and by 34.8% to R80 562 after more than ten years in the profession.

By this point, they’ve restored their advantage over average full stack developers to 4.4%.

Average salaries are single data points and only one part of a bigger story. It’s expected that many respondents may earn significantly more or significantly less than these averages. However, we hope to map underlying trends by mapping the average salaries for different experience levels.