Entry-level Java developers can expect a gross monthly salary of R19,550. This increases by a massive 54.2% to R30,146 once they reach two years of experience as Junior developers.

Java developers in South Africa can expect to see their biggest salary jump once they have more than four years of experience under their belt.

Java developers with four to six years of experience see their salaries rise by 56.9% to R47,292.

However, this salary growth starts to slow once they reach higher levels of seniority.

After six years in the job, Java developers can expect a 41.5% increase to an average monthly salary of R66,913.

Senior Java developers with more than ten years of experience see the lowest salary increase in their career: An additional 35.4% earns them average salaries of R90,611. 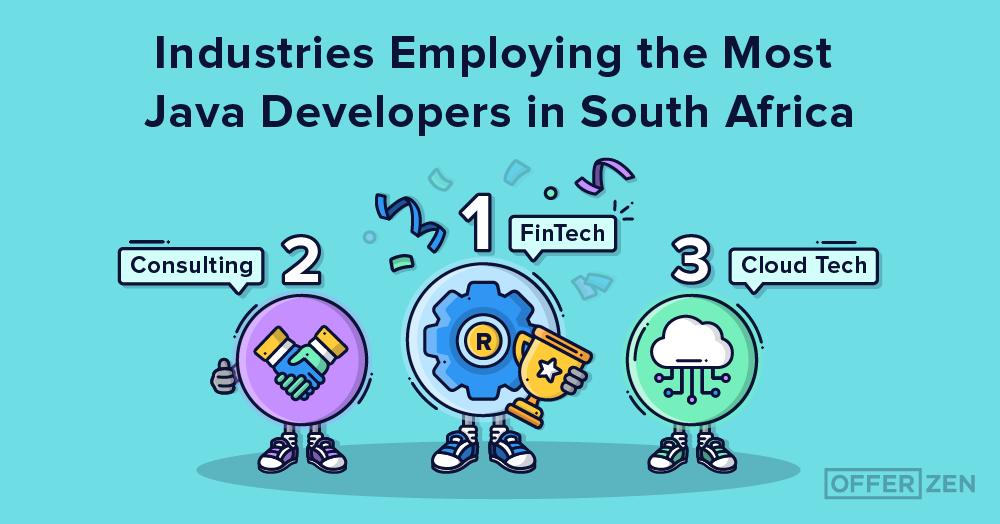 The data shows that most of South Africa’s senior Java developers work in FinTech, Consulting, and CloudTech. Why does this matter? Since 2019, FinTech and Cloud Tech have been the best-paying industries for developers in South Africa, especially at higher levels of seniority.

Apart from their current industry, a Java developer’s role can also affect their starting salary and earning potential across their careers.

In general, full stack developers are the second highest earning group among South African developers in 2022, after backend developers. Here, we’ll see what full stack Java developers earn at each stage of their careers.

Once they have more than four years of experience, full stack Java developers get the biggest salary jump of their careers:

Salary growth for senior developers tends to slow down, but full stack Java developers can still look forward to an increase of 38.1% to an average R64,383 at six to ten years of experience, and another 27.5% increase after ten years, to R82,667.

Entry-level Spring developers start out with an average monthly salary of R20 333, 4% more than the average for an entry-level Java developer.

Once they have two years of experience under their belts, the average salary for a junior Spring developer increases by a massive 64.3%. This gives them an average monthly salary of R33 418. By this stage of their careers, they earn 10.9% more than the average Java developer with comparable experience.

Once they pass the four-year mark, Spring developers can expect a 44.1% increase, giving them an average salary of R48 150. Despite the increase, the gap between intermediate Spring and Java developers has narrowed to 1.8%.

Senior Spring developers with more than six years of experience can expect an additional 34.5% increase for an average salary of R64 755. This increases by a further 39.1% to R90 093 after they’ve been in the profession for more than ten years. By the time they become seniors, Spring developers no longer earn more than their Java counterparts.

Salaries depend on the industry, individual, perks and nature of work. These factors all influence the salary a company will offer to a prospective hire. Most developers are “fluent” in several languages and this will affect the final figures as well.

It’s also important to keep in mind that every individual’s context is different. At the end of the day, salary is a personal conversation that should take place between employee and employer.