Backend developers are the highest earning group among South African developers in 2022. Here’s an overview of backend developer salaries at junior, mid- and senior level and for two of their best paying programming languages, Java and Python.

Our 2022 State of the Software Developer Nation data shows that a developer’s salary is, among other things, affected by their experience, programming languages and role.

In 2022, backend developers’ salaries are the highest of all South African software developers.

On average, backend developers earn 27% more than their frontend counterparts. The difference between these roles is widest for senior developers with more than 10 years of experience, at a steep 33%. 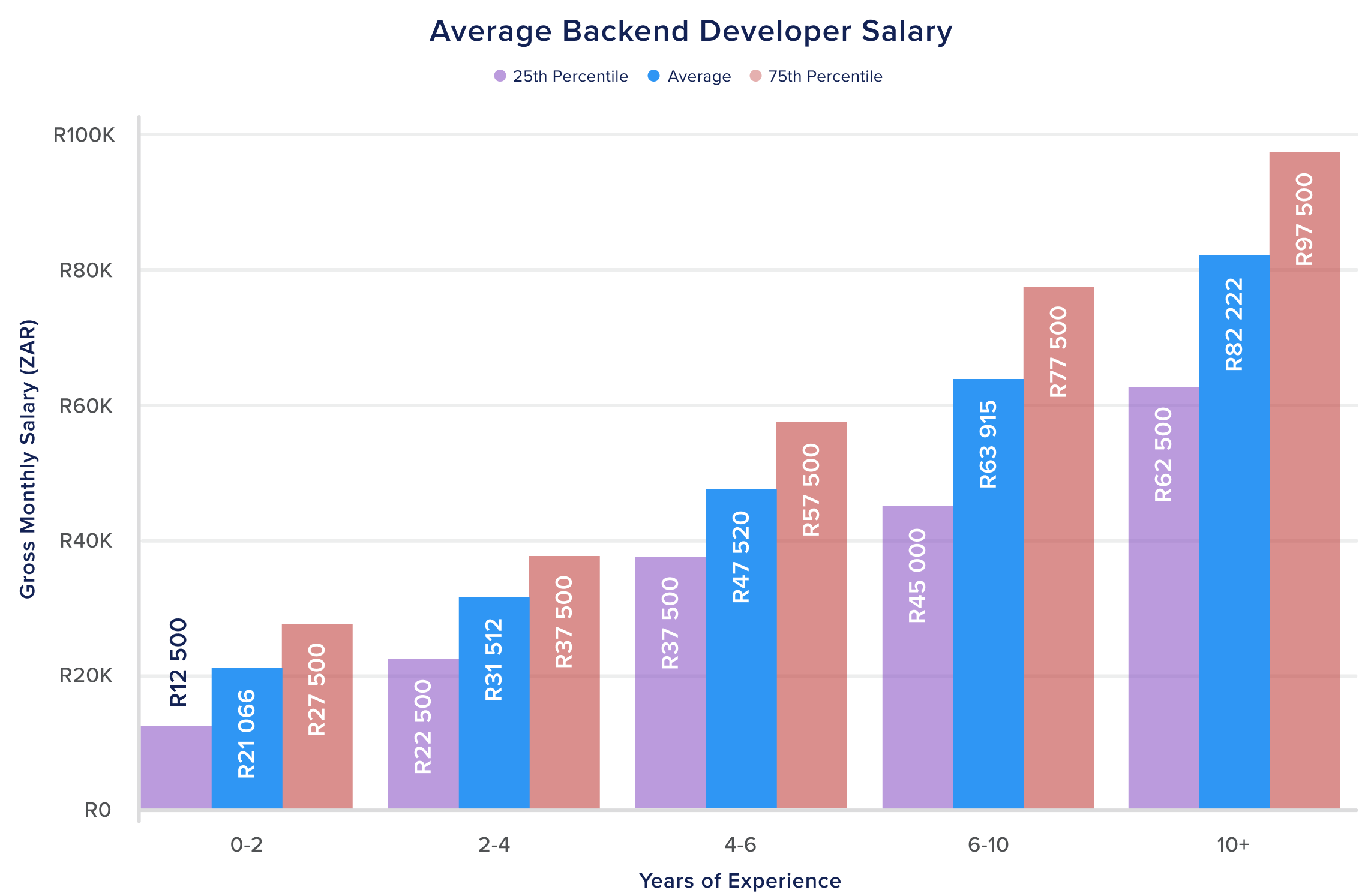 Let’s take a look at what backend developers can expect to earn at each stage of their careers.

Junior backend developers with fewer than two years of experience start out with an average monthly salary of R21,066, but it doesn’t stay like this for long. In the first few years of a backend developer’s career, salary increases are quite impressive:

After two years in the profession, the entry-level backend developer salary increases by 50% to R31,512. This continues at the 4-6 year experience mark, where mid-level backend salaries again shoot up by a whopping 51% to R47,520.

A junior backend developer’s salary more than doubles by the time they’ve been in the job for over 4 years.

In fact, backend developers are not alone with their steep salary increases in their early career. The picture looks quite similar for frontend and full stack developers.

Why? While they are still finding their feet in the early stages of their careers, developers tend to change jobs a lot more. This gives them a chance to negotiate a market-related salary that’s higher than the inflationary increases developers can expect if they stay with one company.

Depending on how much they’ve progressed, they might also quickly level up their skills to a mid-level developer. Companies hiring developers at these career stages are more inclined to offer what might seem a big increase, because overall, the salary range still isn’t that high.

Salary growth slows down for backend developers at the senior level:

Backend developers’ overall salary growth starts to slow down after 6-10 years in the job.

However, that doesn’t mean there is no growth at all. Senior backend developers can still look forward to a respectable increase of 35% to an average R63,915 at 6-10 years of experience, and another 29% increase after ten years, to R85,222.

Why the slow-down? In addition to senior developers generally changing jobs less often than juniors, companies also have to start thinking a lot more about salary increases as a developer’s salary level becomes “more expensive”.

A developer’s role and experience are not the only factors affecting their salaries. The programming languages they master are another booster.

Most used programming languages by backend developers in South Africa 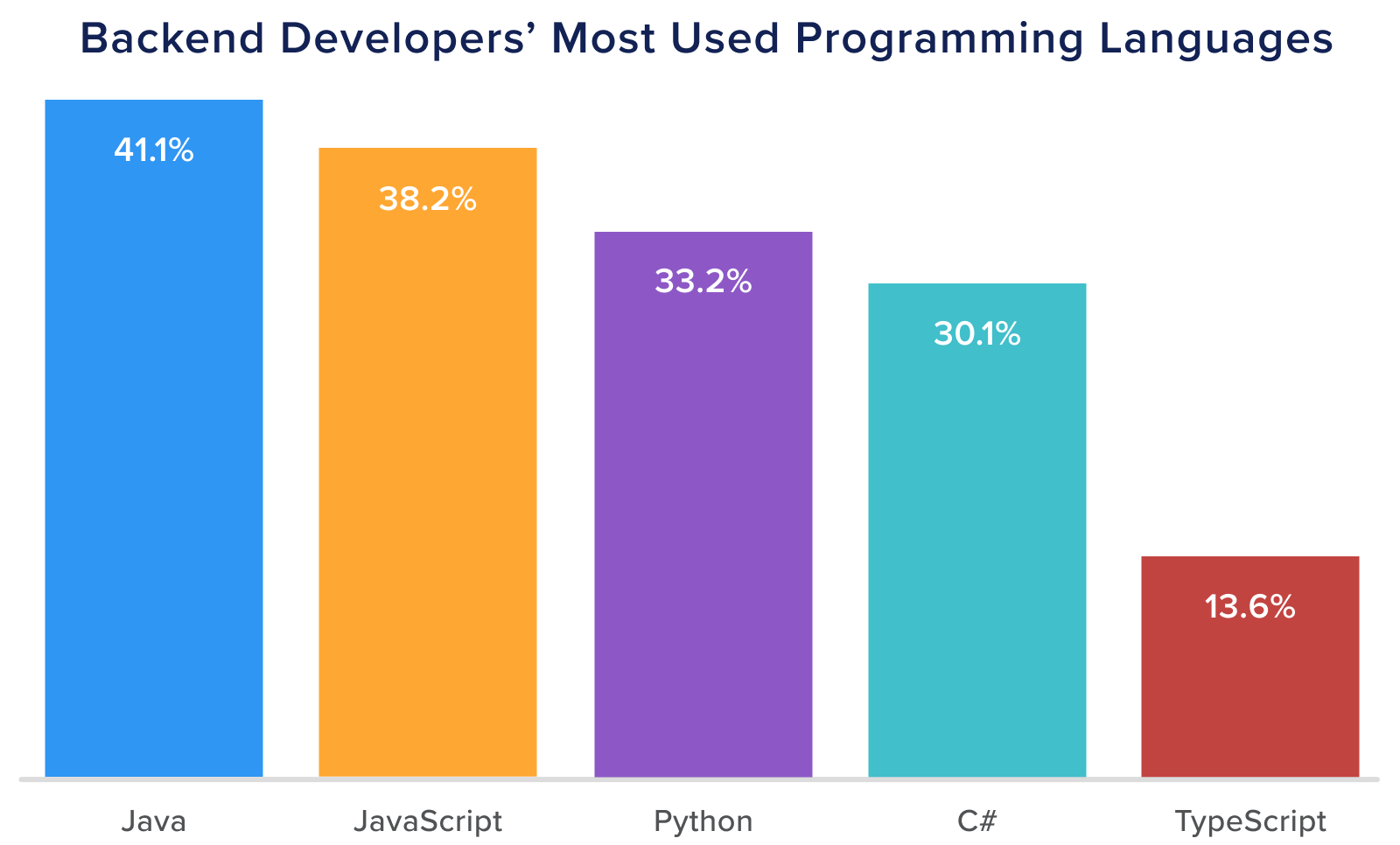 This makes sense, because the data also shows that South African backend developers predominantly work in the FinTech industry where one of the most used languages is Java.

Two other programming languages that make up the top three most used for backend developers are JavaScript, and developer-favourite Python.

So how do these top five most used languages affect backend developer salaries? 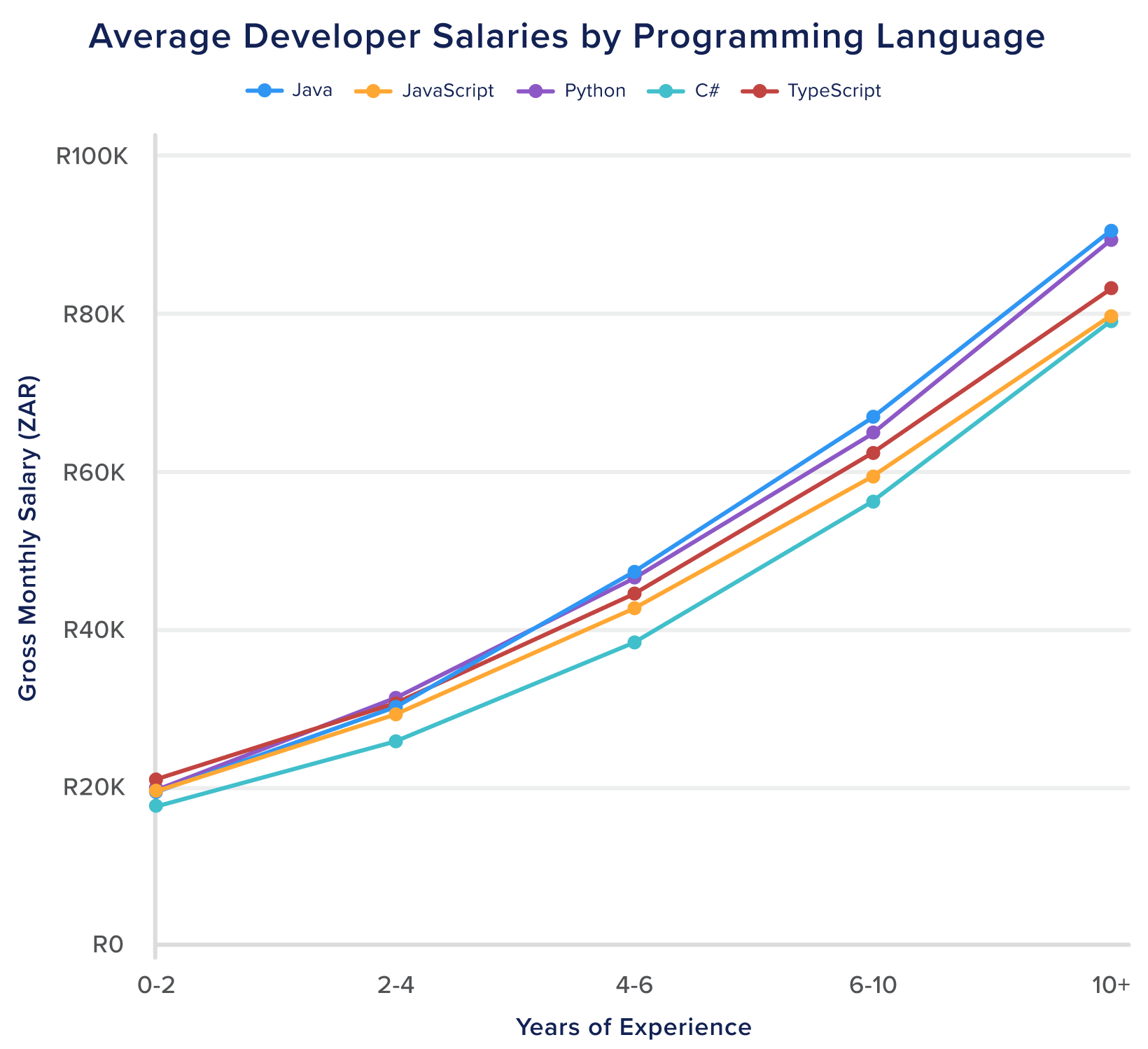 For juniors, TypeScript is the best paying of the top 5 most widely used languages among backend developers.

Junior TypeScript developers earn an average of R20,352 each month, or 3% more than their C# counterparts and 7% more than Java developers.

However, after 2 years of experience, Java and Python are the two best paying languages at each stage of a backend developer’s career.

Let’s take a closer look at what backend developers working with Java and Python can expect to earn. 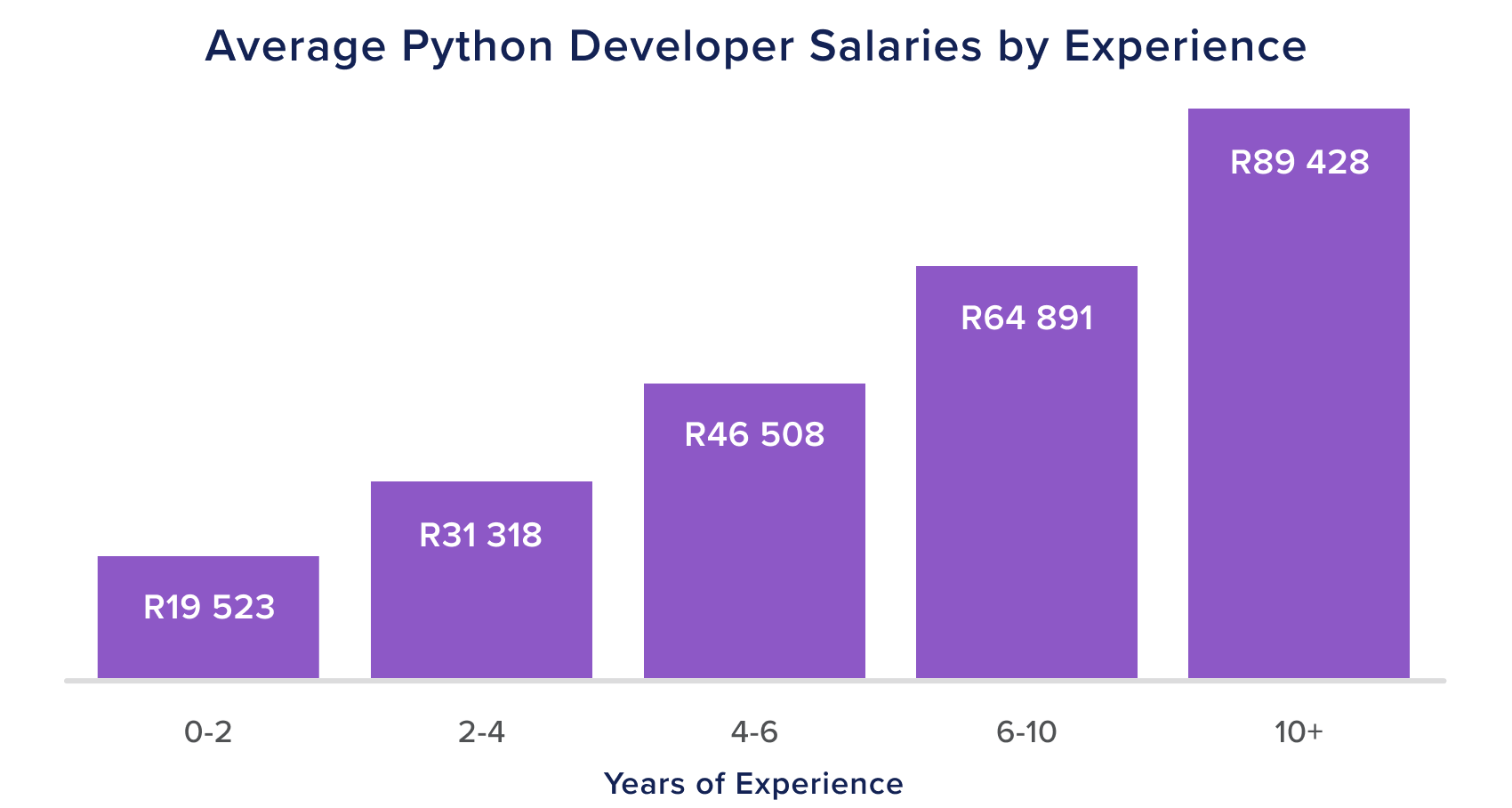 Python developers with fewer than 2 years of experience earn average salaries of R19,523. 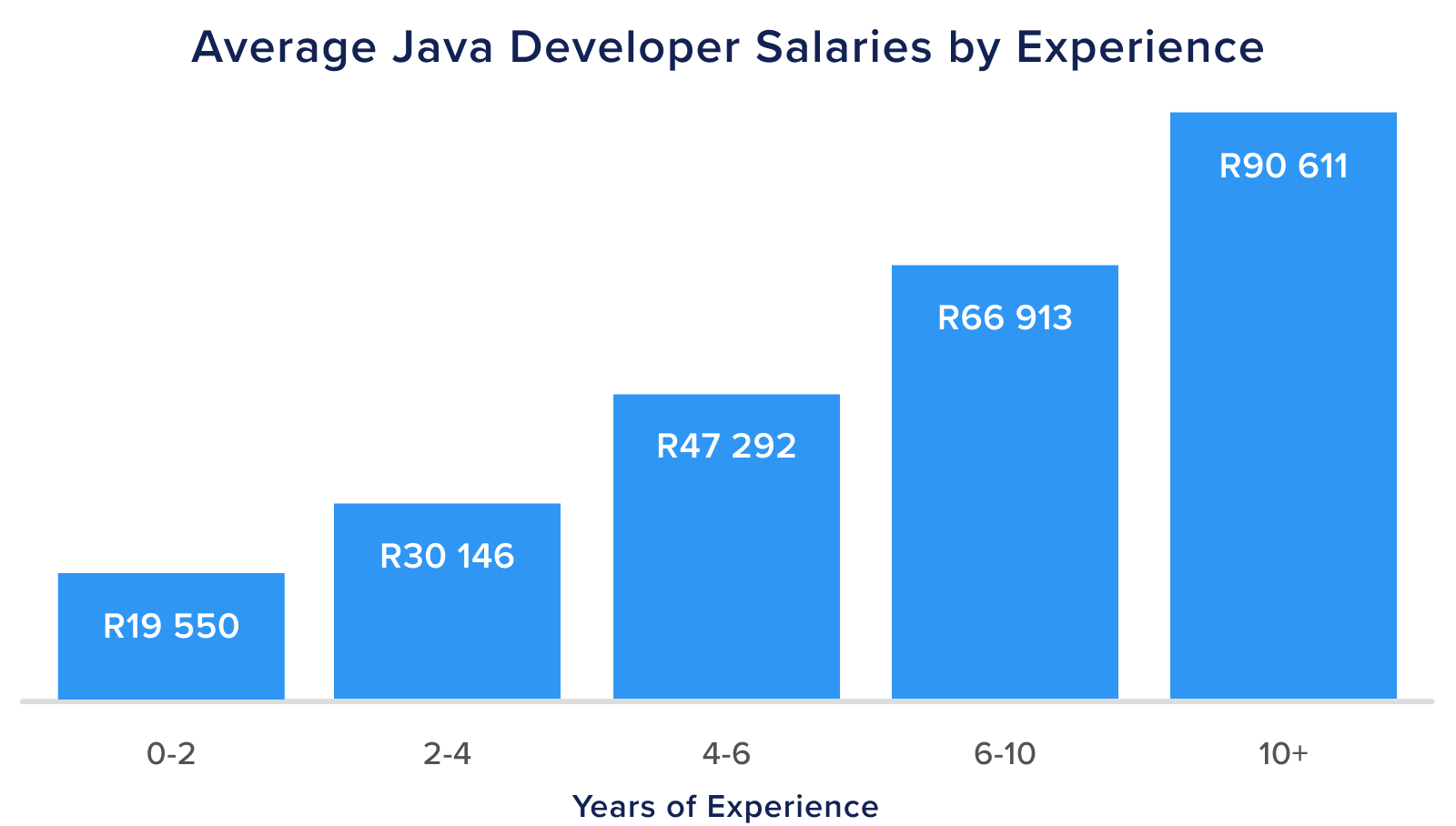 While Python developers have the edge at the junior level, Java is the best paying language for experienced backend developers.

Again, salary growth begins to slow at higher levels of seniority. Java developers with more than 10 years of experience can expect a respectable 35.4% increase to R90,611 and a slight edge over their Python counterparts.

Salaries are dependent on the industry, individual, perks and nature of work. These factors all influence the salary a company will offer to a prospective hire. Most developers are “fluent” in several languages and this will affect the final figures as well.

It’s also important to keep in mind that every individual’s context is different. At the end of the day, salary is a personal conversation that should take place between employee and employer.