It’s no surprise to learn that COVID-19 impacted software developer salaries. Fortunately, there is some good news: Intermediate and senior developers in Pretoria have seen big increases.

Using data from hires made on the OfferZen platform, here are our insights into software developer salaries across Cape Town, Johannesburg and Pretoria over the past year. 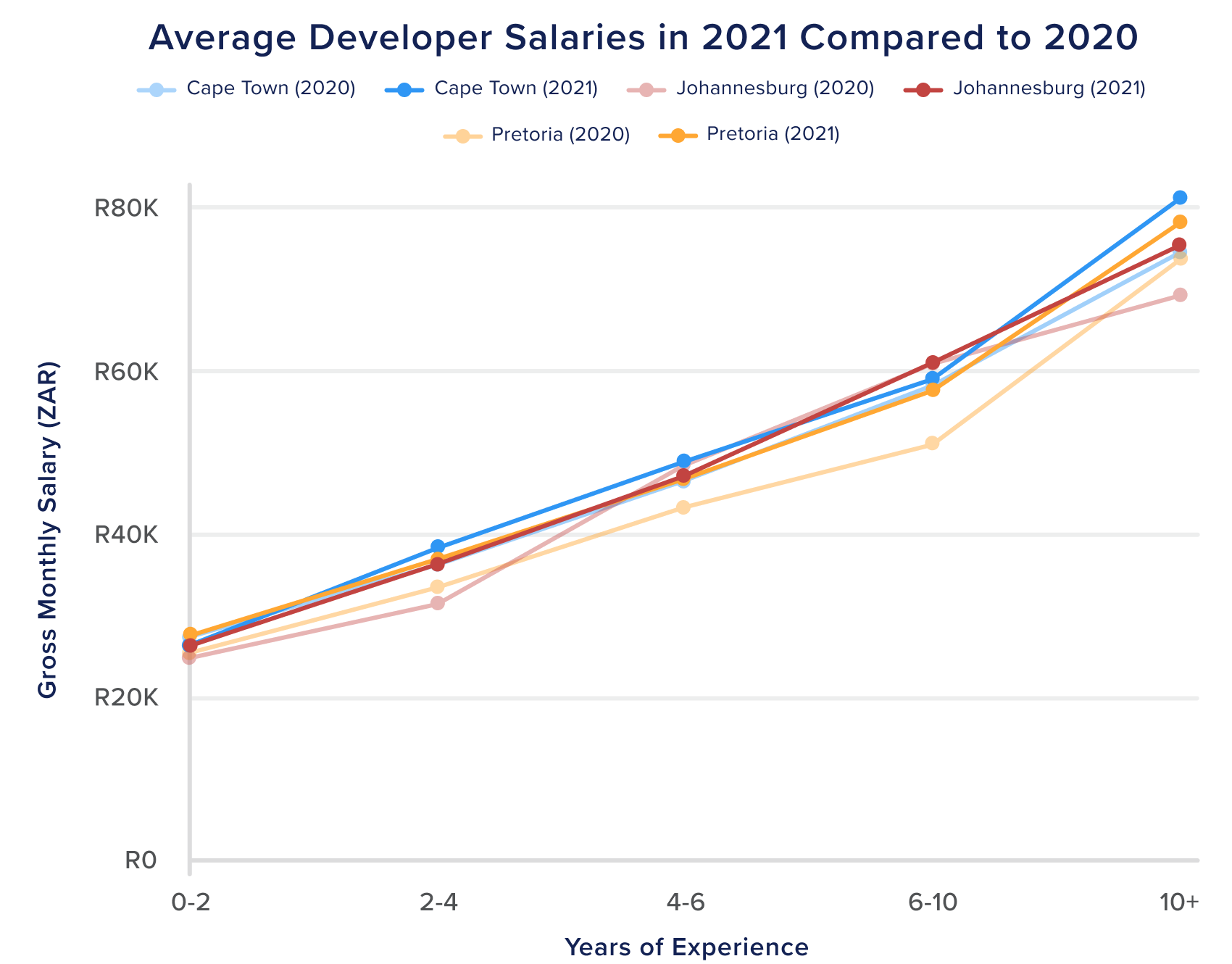 A lot has changed since we last compared developer salaries in Johannesburg, Pretoria and Cape Town in 2020. Last year, the COVID-19 pandemic forced entire companies to go remote, and entire sectors to shut down for large parts of the year. So, how have developer salaries been affected by the pandemic?

Developers with 2 to 4 years of experience have also seen their salaries increase since 2020: Capetonian developers in this bracket experienced a 6% increase, followed by an 11% rise in Pretoria. Johannesburg-based developers have gained the most with a whopping 16% increase.

However, things look a little bit different at 4 to 6 years of experience: Salaries for Johannesburg-based developers decreased by 2% since 2020. Meanwhile, those working in the Mother City are bringing home about 5% more every month and those in Pretoria an extra 8%.

Pretoria continues to lead the way at the 6 to 10 year level: While developer salaries in South Africa’s capital rose by an impressive 13% since 2020, Capetonian developers only experienced a 1% increase, while those in Johannesburg only saw a 0.3% increase in their monthly salaries.

However, it’s not all doom and gloom for Johannesburg. There was a 9% increase in salary for developers with more than 10 years of experience in South Africa’s largest city, followed by Cape Town at 8% and Pretoria at 6%.

In light of these changes, let’s have a look at which South African city currently pays the best software developer salaries.

Developers in Cape Town have the highest average salaries 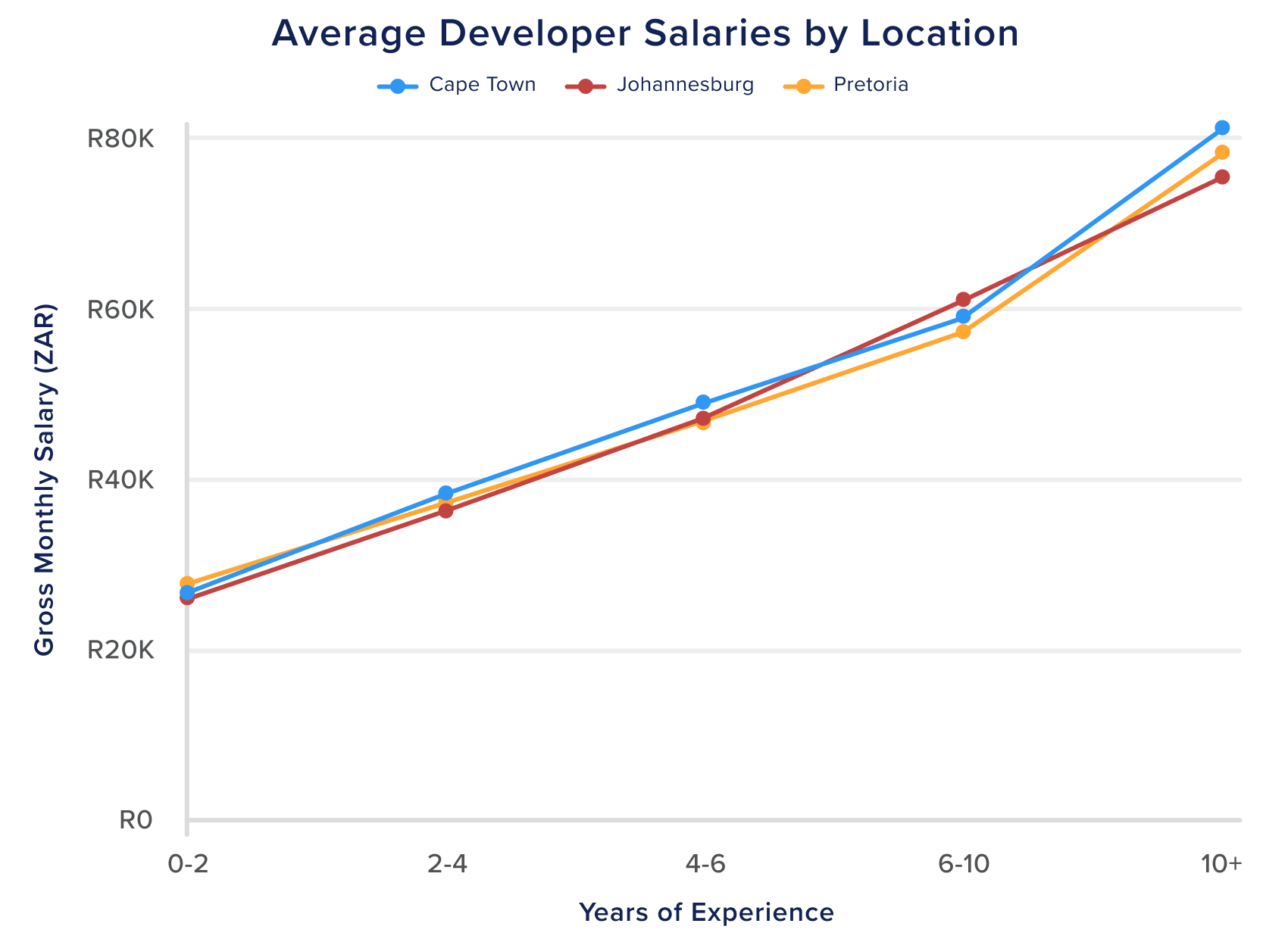 When comparing average salaries for 2021, we found that Cape Town offers the highest. Capetonian developers earn an average monthly salary of R50,993. This is approximately 3% higher than both Pretoria’s at R49,432 and Johannesburg’s at R49,403. 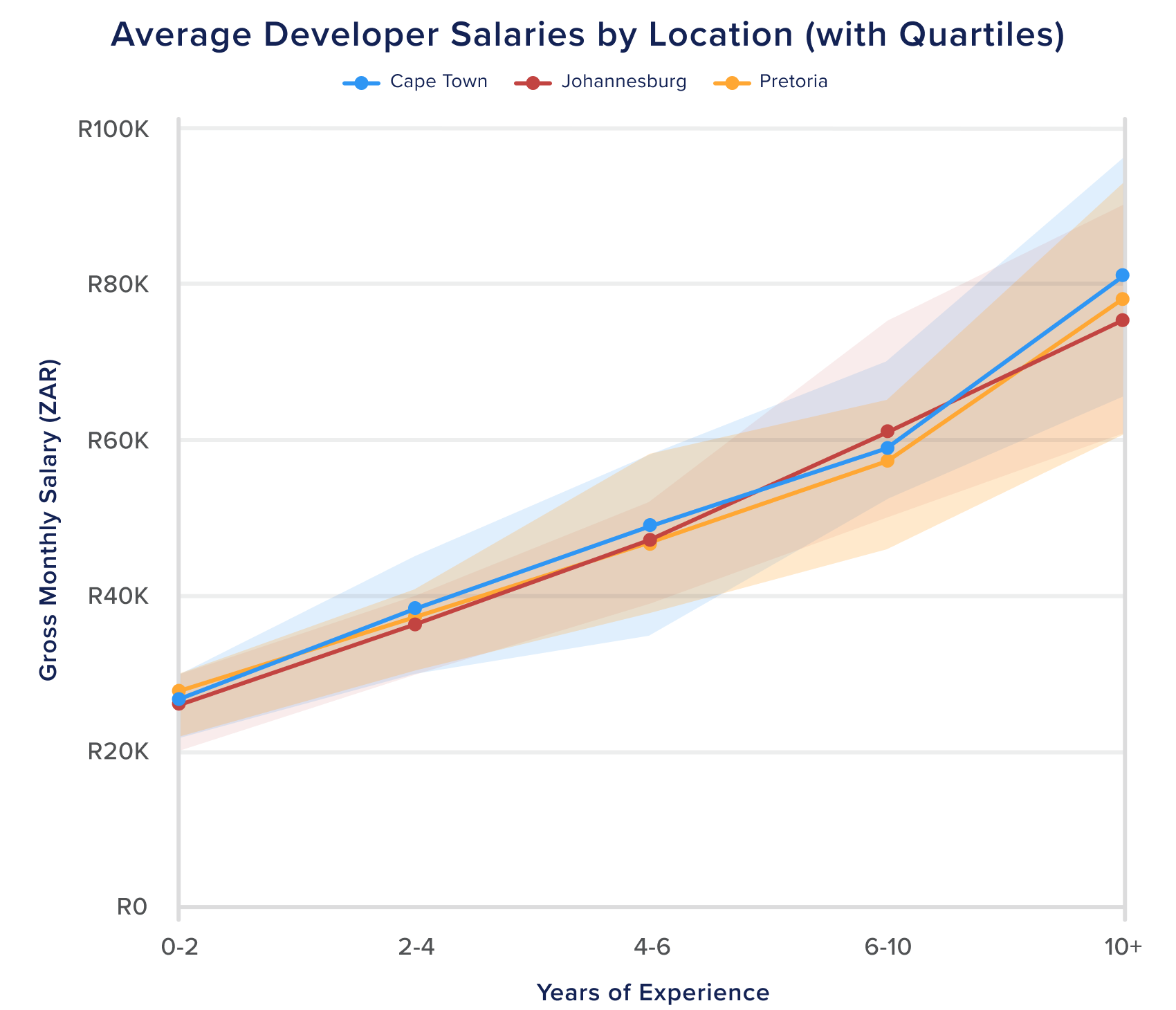 Looking at average salaries doesn’t tell the whole story. Your level of experience is a better indicator of what you can expect to earn in each city.

Junior developers earn the most in Pretoria

Junior developers with 0 to 2 years of experience in the country’s capital earn an average monthly salary of R27,217.

This gives Pretoria a slight edge over Cape Town’s R26,867. Johannesburg takes third place with average salaries 3% lower than those in Pretoria.

But while Cape Town has to settle for second place for junior developers, it takes the lead at the intermediate level.

And Cape Town continues to lead the way for developers who’ve passed the 4 year mark.

Capetonian Developers with 4 to 6 years of experience have average salaries of R49,049 giving them a 4% lead over Johannesburg.

Johannesburg overtakes Pretoria to narrowly claim second place. At R47,390 each month, Joburg’s software developers earn less than 1% more than those in Pretoria.

Johannesburg takes the top spot for senior developers with 6 to 10 years of experience. These developers can expect an average monthly salary of R61,178. This is about 4% more than second-placed Cape Town.

The gap between Johannesburg and Pretoria begins to widen for developers at this level of seniority.

Johannesburg-based senior developers earn about 6% more than their Pretoria counterparts.

Cape Town has established itself as the best-paying city in the country for developers with more than 10 years of experience.

Capetonian developers with more than 10 years of experience can expect to earn R81,279 each month.

Pretoria developers have the most buying power 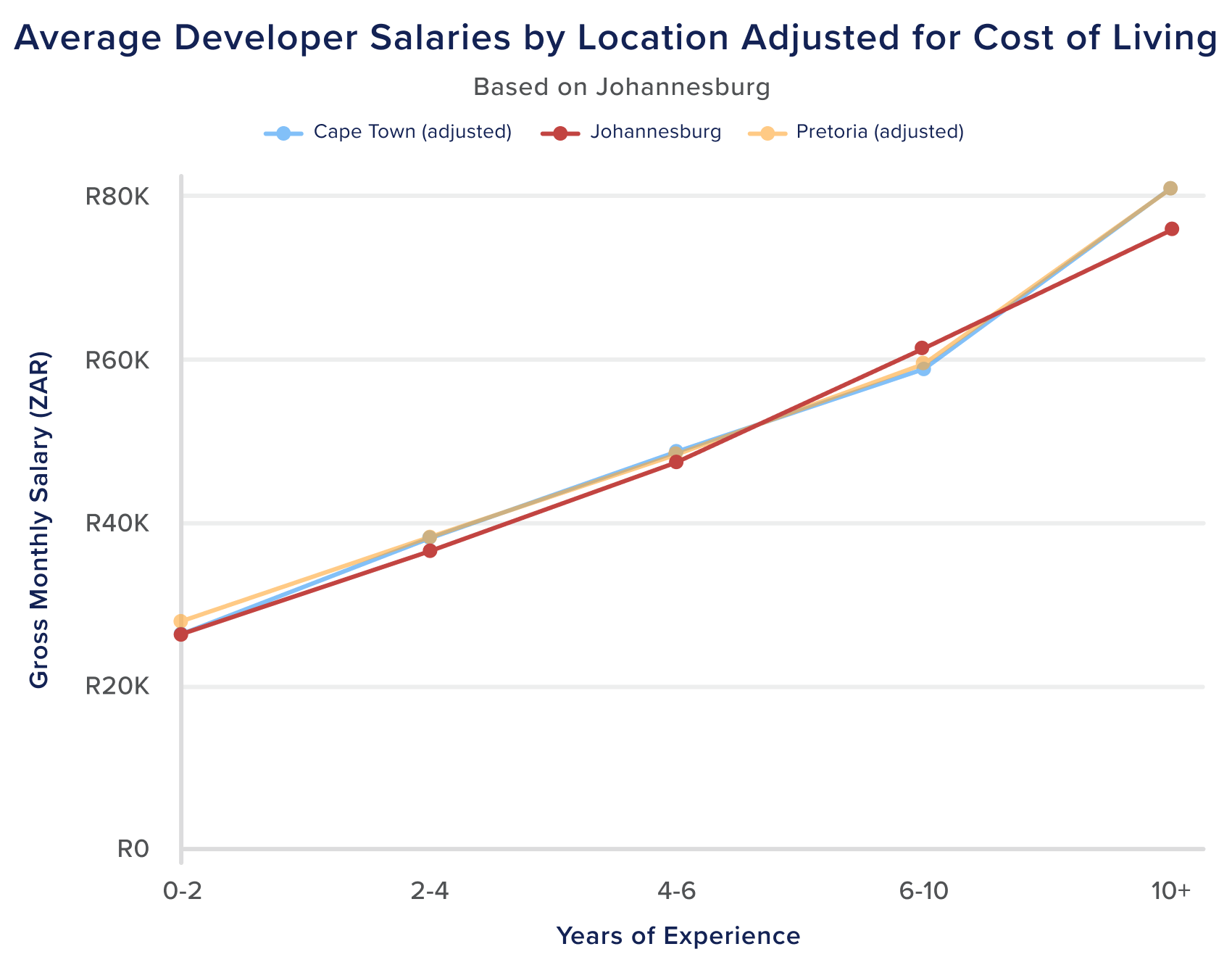 In 2020, we found that, when compared to Johannesburg, it is 8% more expensive to live in Cape Town, but 5% cheaper to live in Pretoria.

When we looked at the data for 2021, the differences between the cities had shrunk: When compared to Cape Town, it is now only 1% cheaper to live in Johannesburg and 7% cheaper to stay in Pretoria.

Here’s another way to think about this:

Right now, Cape Town seems to be the place to be for developers. Capetonian developers earn an average monthly salary of R50,993. This is about 3% higher than both Pretoria’s R49,432 and Johannesburg’s R49,403.

If we take the average Cape Town salary as 100% spending power, what spending power does that same salary afford in Johannesburg and Pretoria?

Developers in Pretoria have the most buying power even though developers in Cape Town can expect higher average salaries. Those based in South Africa’s capital city have, on average, 7% more spending power compared to Cape Town.

OfferZen is a curated marketplace, where we pre-screen candidates for quality. This means that the data from our platform will vary from other resources like our State of the Developer Nation report, which is based on survey responses from over 3,500 developers in the South African tech community.

In this article, “salary” refers to the gross monthly salary (before tax) that developers on OfferZen were hired at at the time of signing their contract. It excludes other incentives like equity or bonuses. Our platform data only reflects new placements made during the year.

Last but not least, it is always important to keep in mind that every individual’s context is different. At the end of the day, salary is a personal conversation that should take place between employee and employer and should take into consideration the nature of work, perks and other contextual factors like tech stack or industry.