A lot has changed since our last developer salary article comparing Johannesburg and Cape Town in 2019. Entire companies have gone remote, budgets have been reviewed, and teams have been restructured in order to adapt to the rapid changes brought about by COVID-19. Using data from placements made on the OfferZen platform, we want to give you insight into developer salaries on our marketplace over the last year. Here are our findings.

Hiring activity on OfferZen has recovered to pre-COVID levels

In April, hiring activity on OfferZen dropped by more than 25% when compared to last year. This shows the extent to which companies paused their hiring in response to South Africa’s lockdown. However, we have since seen a recovery in this activity and are now seeing some of the busiest weeks of hiring on the platform ever. 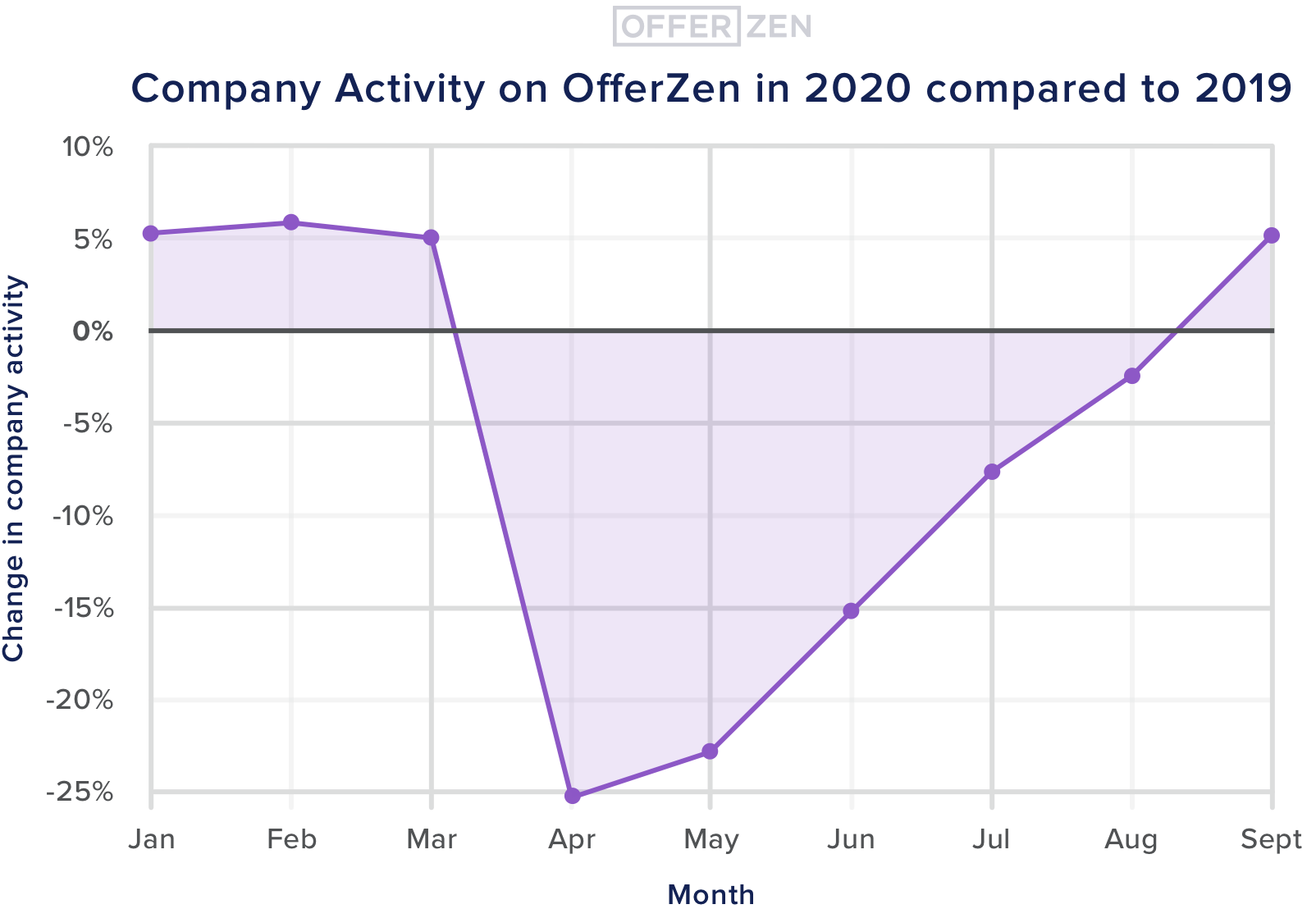 While we’ve also seen a rise in company activity with regards to hiring for remote roles this year, it is too soon to say whether this will continue to increase and persist into the future. The impact of remote work requires further analysis and is not covered in this article.

How did developer salaries in Pretoria compare to Johannesburg and Cape Town?

Since our last salary article in 2019 comparing Johannesburg and Cape Town, hundreds of developers have found jobs through OfferZen and our presence in Pretoria has grown by 129%. That’s why we’re including Pretoria in this year’s analysis. 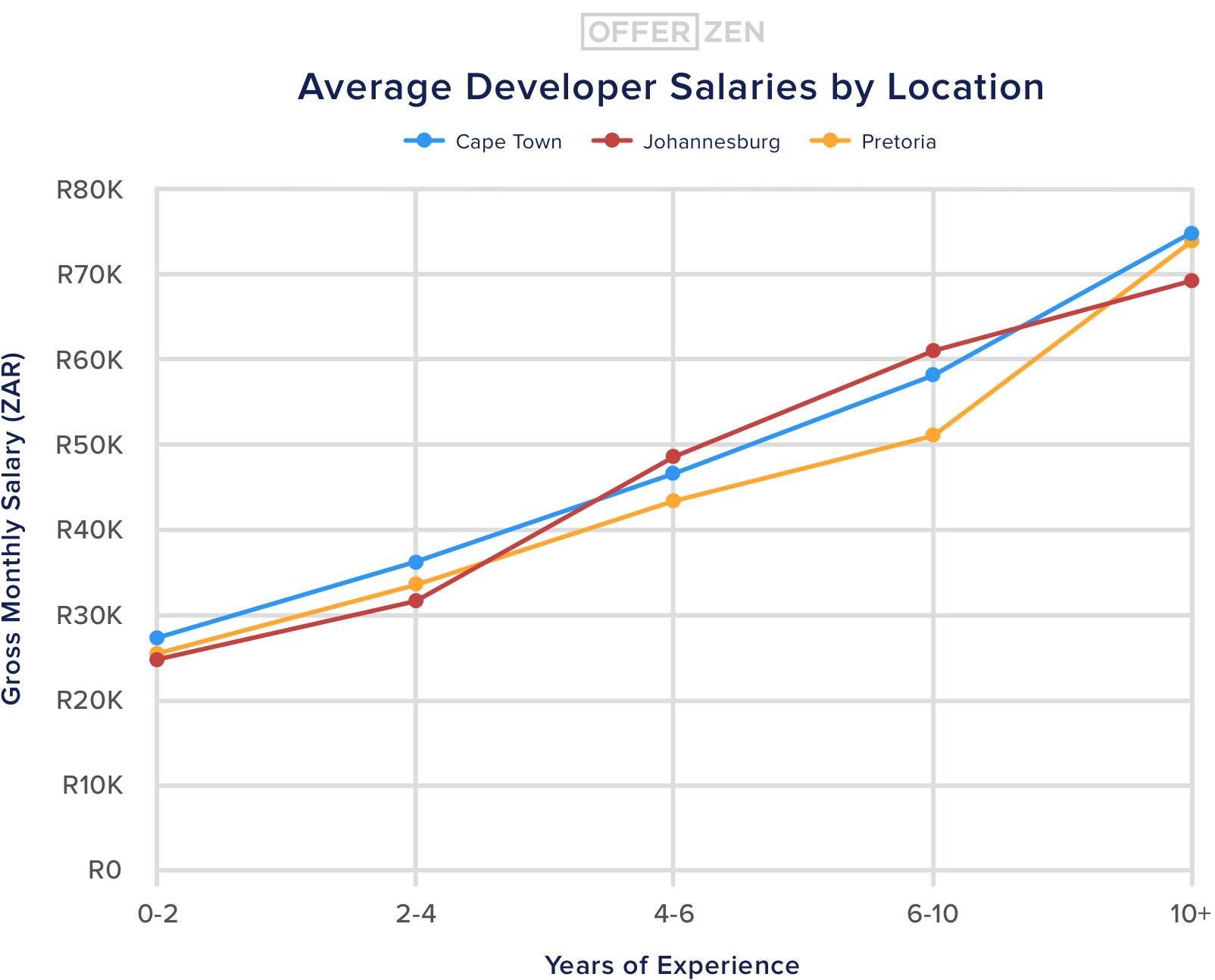 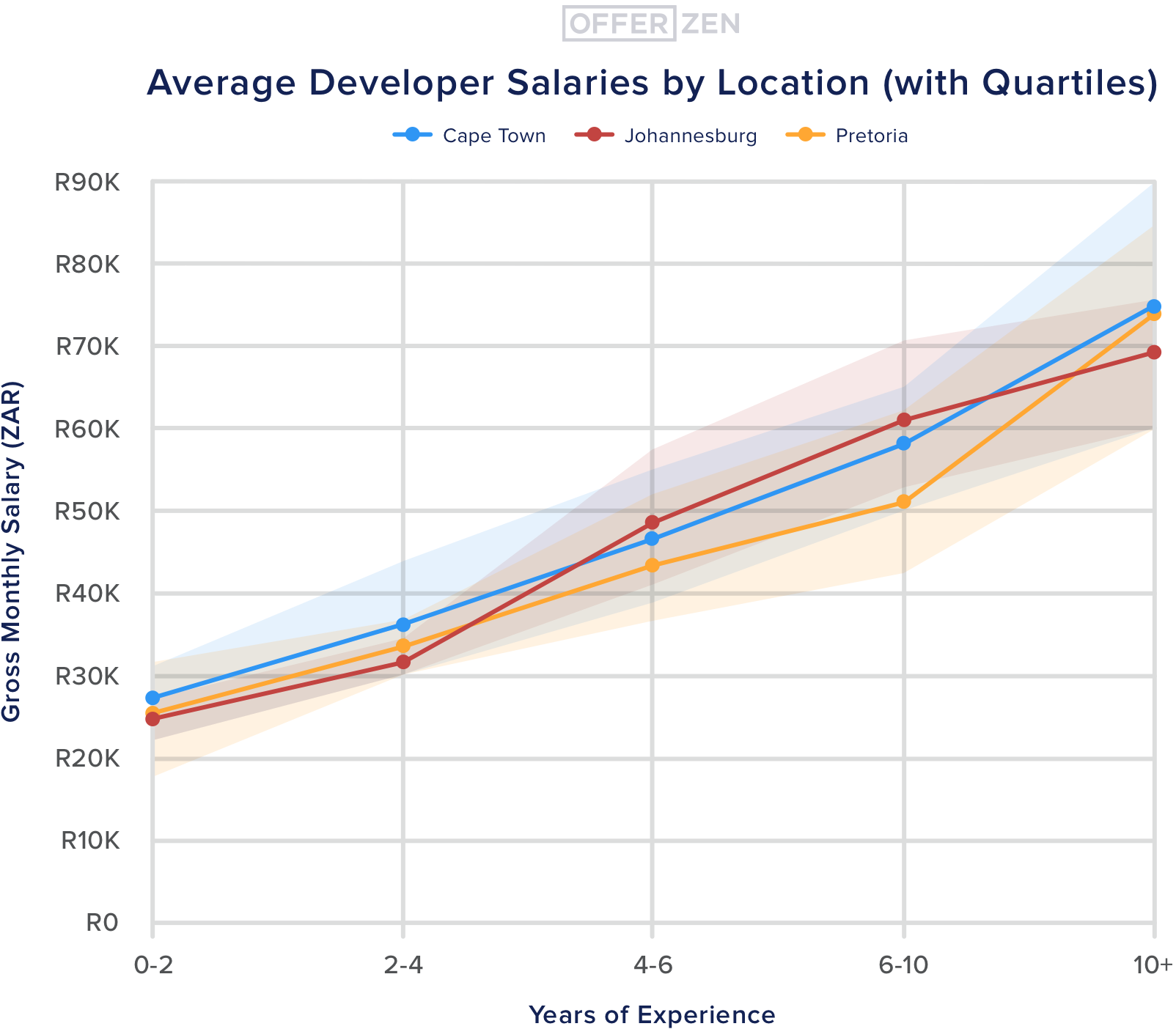 Junior developers on OfferZen earned the most in Cape Town

Last year, we found that junior developers earned more in Cape Town than they did in Johannesburg.

In 2020, it seems that the trend remained the same. At R27.5K, junior developers with 0-2 years of experience in Cape Town earned 10% more than developers in Johannesburg. 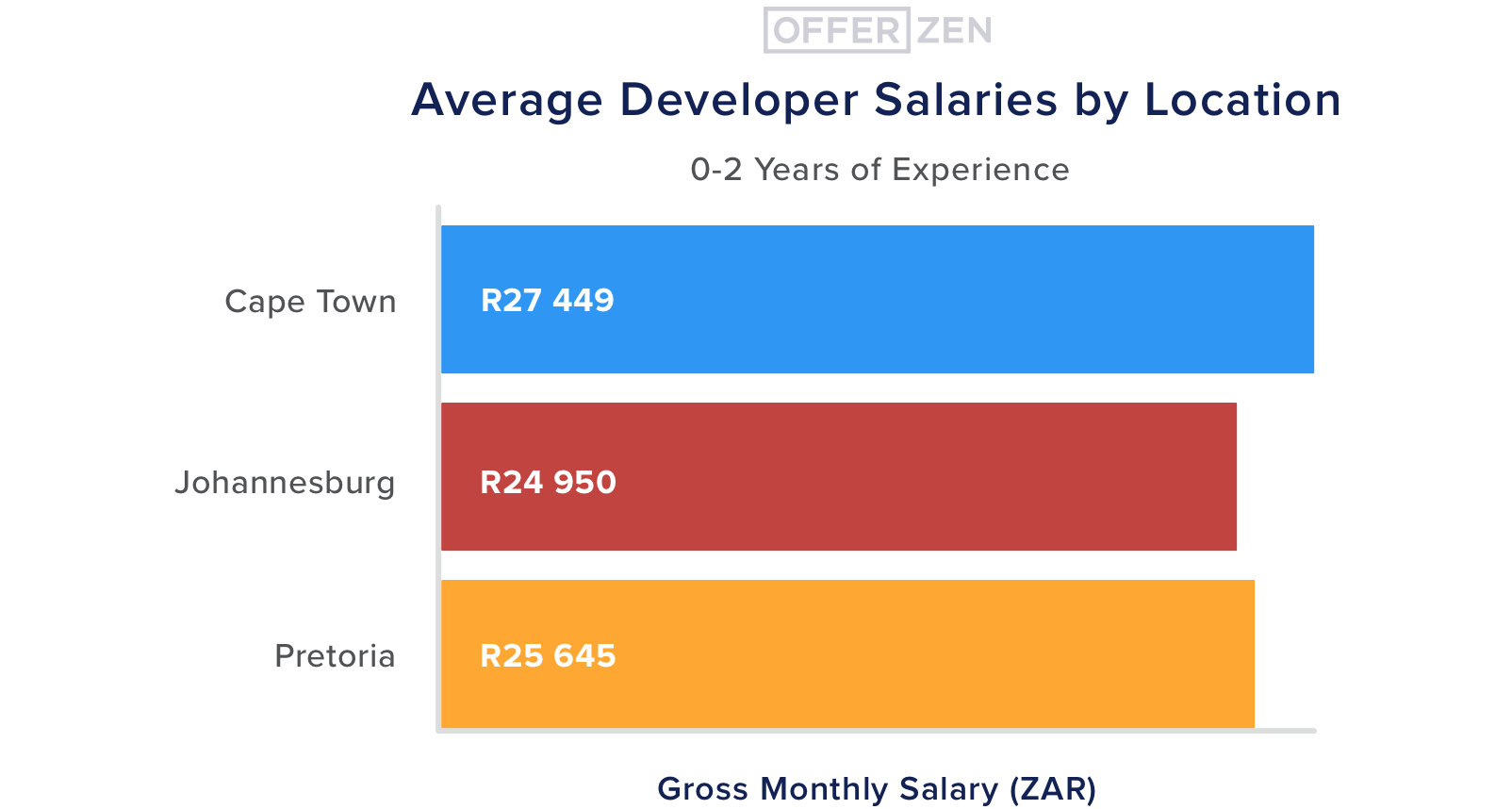 Interestingly, Junior developers in Pretoria were the second highest earners at R25.5K per month, marginally surpassing Johannesburg juniors who averaged at R25K.

Senior developers earned more in Johannesburg – until the 10 year mark 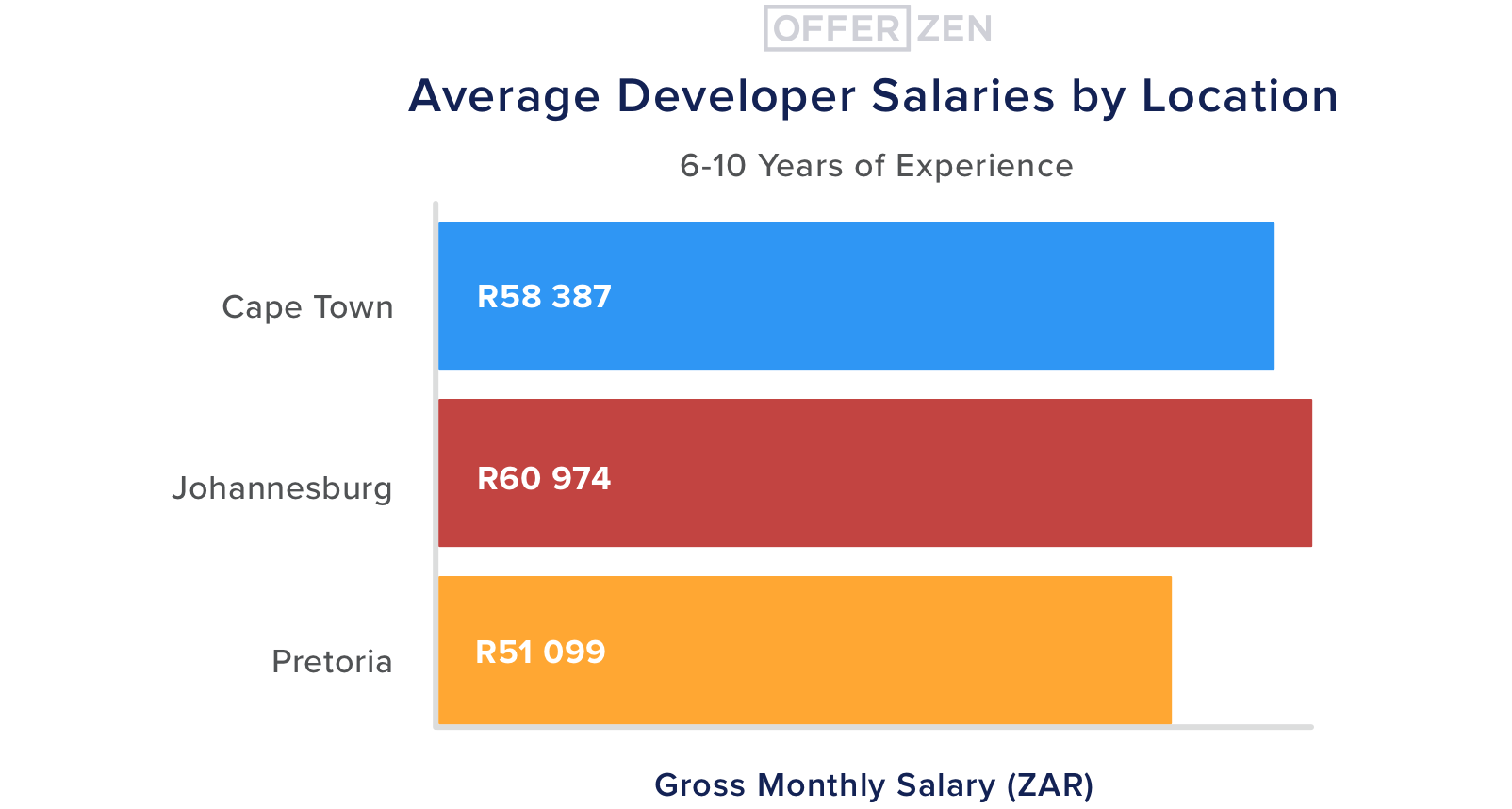 However, this changes when it comes to developers with 10+ years of experience. At this experience level, developers in Cape Town earned on average 7.7% more than their Johannesburg counterparts. 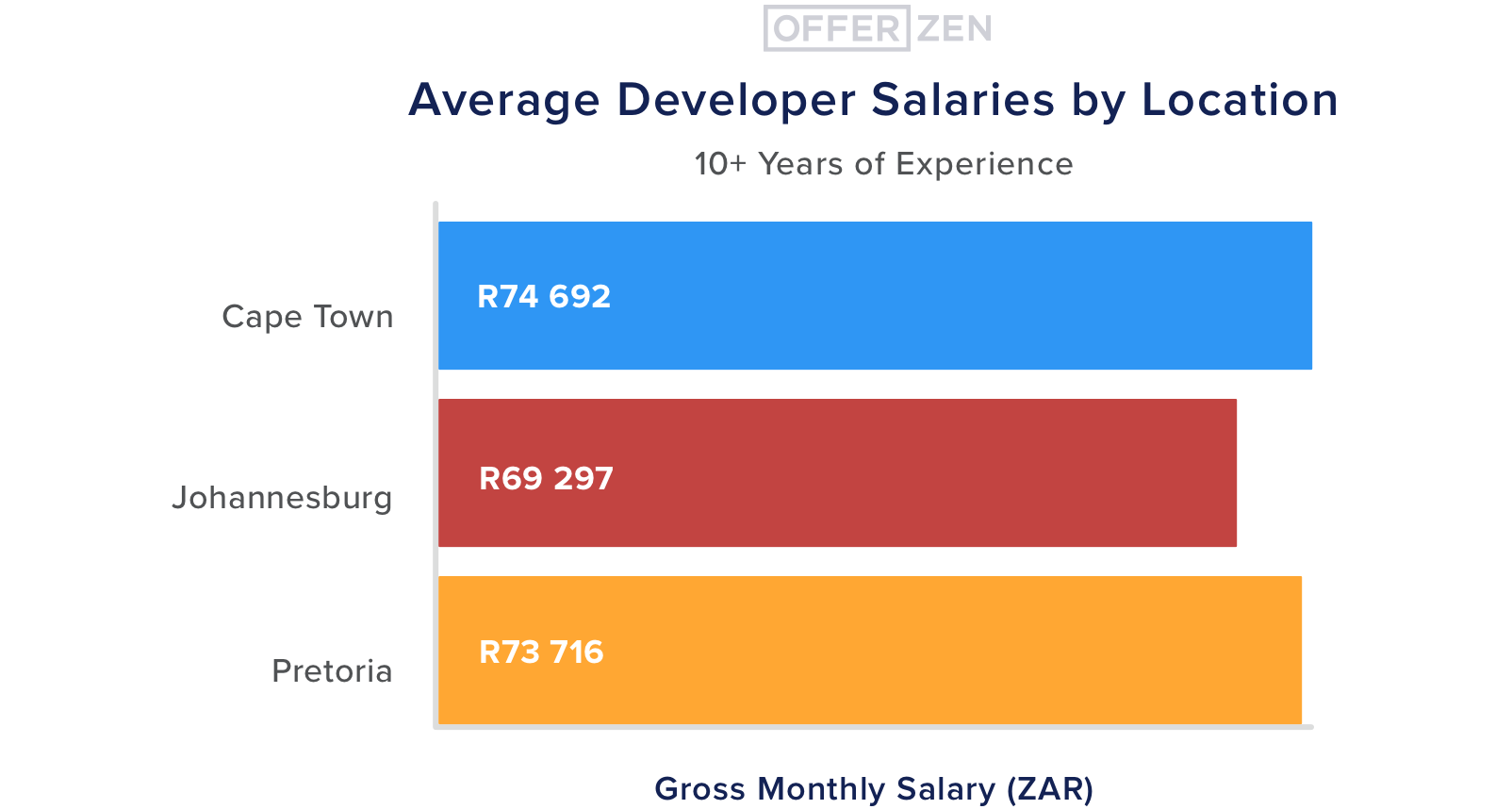 OfferZen Developers in Johannesburg (still) had more purchasing power in 2020

We did this comparison again this year and used Numbeo to adjust for the cost of living. We found that, when compared to Johannesburg, it is 8% more expensive to live in Cape Town, but 5% cheaper to live in Pretoria. Cost of living includes rent, groceries, restaurants and consumer prices. 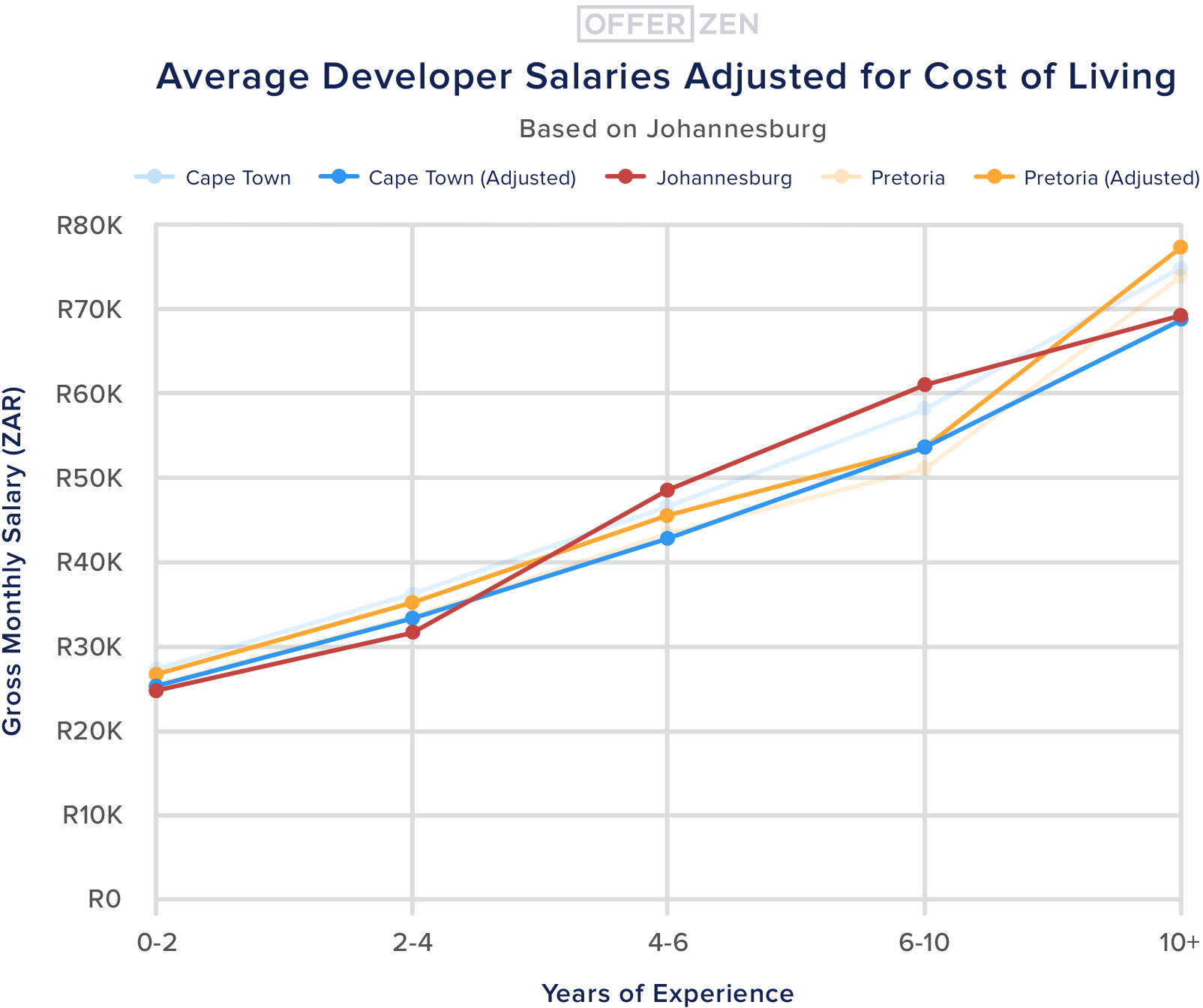 After a pretty rough year for many of us, it’s exciting to see that companies on OfferZen are back in the tech hiring game. If anything, this year has only highlighted that the tech industry has bounced back faster than many other sectors.

Last but not least, it is always important to keep in mind that every individual’s context is different. At the end of the day, salary is a personal conversation that should take place between employee and employer and should take into consideration the nature of work, perks, and other contextual factors like tech stack or industry.

In this article, ‘salary’ refers to the gross monthly salary (before tax) that developers on OfferZen were hired at at the time of signing their contract and excludes other incentives like equity or bonuses. Our platform data only reflects new placements made during the year. It does not reflect any existing employee salary reductions or raise freezes that may have happened this year due to the COVID-19 pandemic.

Topic: Hiring Tips & Insights
Guidelines for a Great Candidate Experience During the Recruitment Process
A smooth recruitment process benefits both potential hires and your team. But balancing your team’s needs and the candidate experience can...
by Nic Botes
Topic: Tech Career Insights
How to Overcome Common Challenges When Transitioning from Developer to Engineering Manager
The switch from developer to engineering manager isn’t easy. Engineering managers, while still relying on their technical skills, need to learn...
by Gregory Witek
Topic: Tech insights
Programmable Banking Community: Building a Single Source of Financial Truth
At July’s Programmable Banking meetup, participants in the low-code/no-code Hackathon walked the community through their submissions. Here Russell Knight teaches the...
by Nick Benson