Setting a salary benchmark is a daunting task, especially if you are new to the job market. If you set it too high, you risk scaring off potential employers, and if you set it too low, you risk being underpaid. We’ve collected the salary data on OfferZen, and compared Johannesburg to Cape Town by years of experience to help you set the bar. Here are our findings.

We wrote our first article comparing salaries of developers in Cape Town and Johannesburg in 2016 and then published an updated report in 2018. Because we’ve grown significantly in the past year, we’ve decided to compare the two cities again; this time with a much larger data set.

When reading this article, keep in mind that the insights are based on internal OfferZen data, not the entire industry. It is also worth noting that OfferZen is a curated marketplace so our averages are most likely somewhat different to national ones. In this article, we’ve also decided to focus only on salaries of software developers rather than include other roles on OfferZen.

Last but not least, salary is a personal conversation that should take place with your employer by taking into consideration the nature of your work, perks and other contextual factors.

Junior developers earn 2.5% more in Cape Town than in Johannesburg.

Developers with 2-4 years of experience earn 7.5% more in Cape Town. 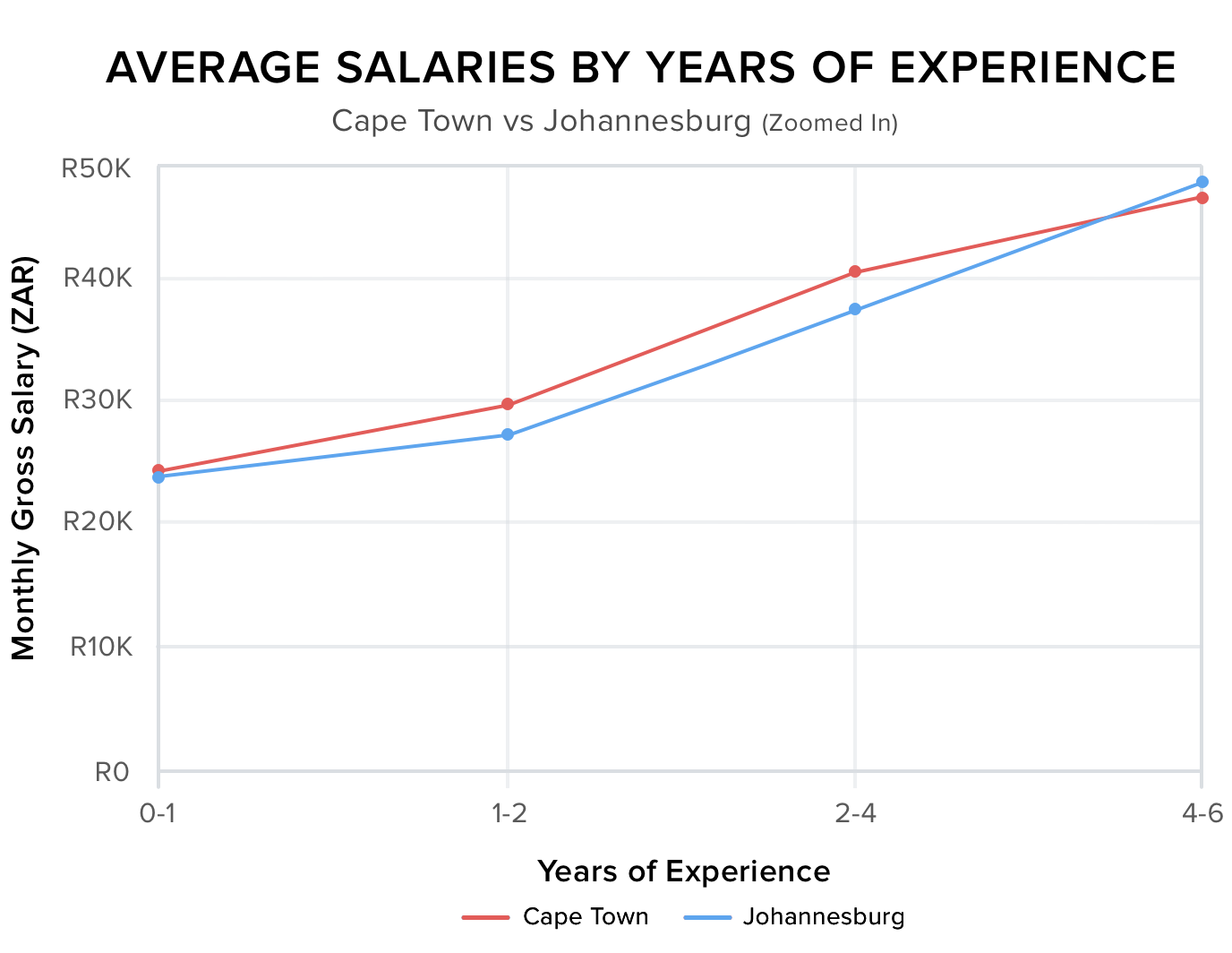 In our 2018 report, the data showed that developers in both cities earned roughly the same until the six-year-experience-mark.

Developers with 10+ years of experience earn more in Cape Town.

Last year, we found that developers in Johannesburg with more than six years of experience earned an average of 5.5.% more than developers in Cape Town. In that same article, we also grouped all developers who had 6+ years of experience. However, in this article, we introduce two additional salary tiers: 6-10 years and 10+ years in experience. We also do an in-depth analysis of the salaries by including the 25th and 75th percentile salaries to give context on the distribution of our data. 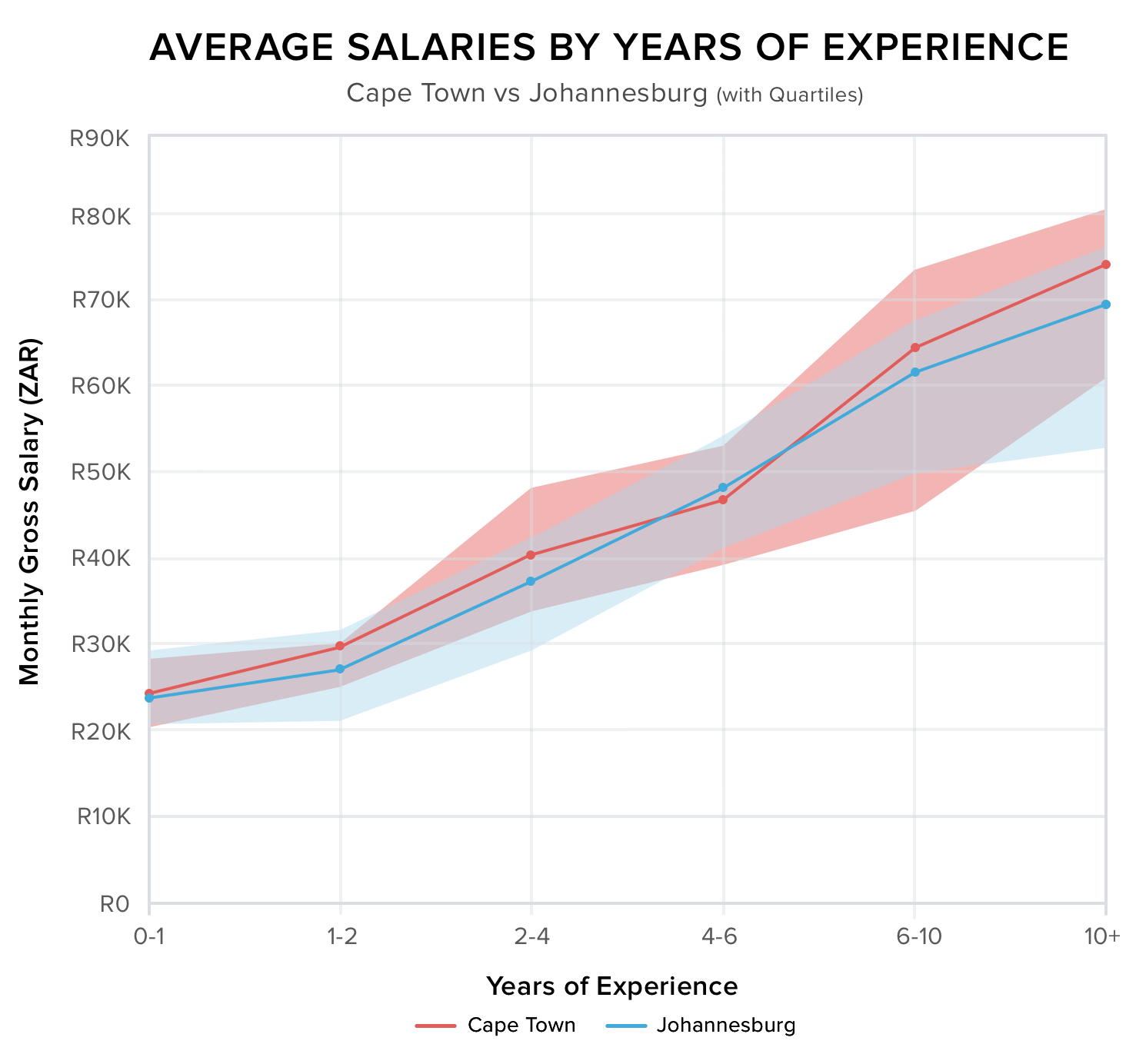 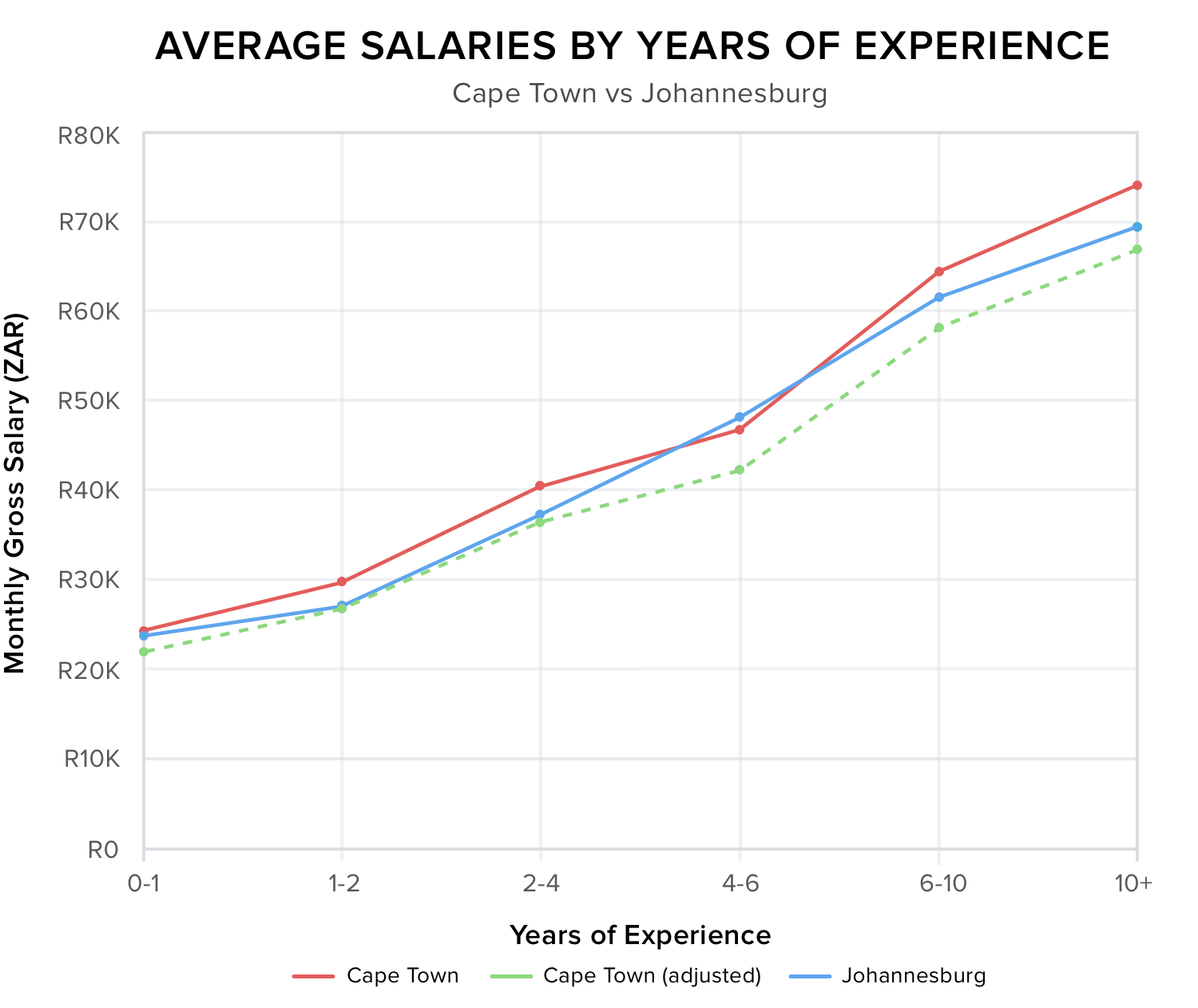 When drawing a comparison between Johannesburg and Cape Town, we realised that, although salary typically increases with years of experience for Capetonian developers, so does cost of living.

So we used Numbeo to adjust for the cost of living and found that, on average, it is 9.8% more expensive to live in Cape Town. Cost of living includes rent, groceries, restaurants and consumer prices. This means that you would only need to earn R36K per month in Johannesburg to get the same spending power as someone earning R39.5K in Cape Town.

If you have any questions or suggestions for a future analysis, leave a comment below.