We’re creating documentaries to tell the tech stories that inspire people to keep creating and learning and ultimately unlock more potential in themselves and the software they’re building.

After the launch of our first documentary, Laravel Origins, and in preparation for the release of our next one, Svelte Origins, we’ve created another developer-must: Swag. Here’s an unpacking of the design, that can only be received by premiere attendees for the swag lovers and private detectives.

We’ve pieced together a collage of ‘all things’ Svelte using community references, the Svelte story so far, and some of the top contributors to the framework featured in the documentary.

Check out the full design below and discover the world of Svelte through design.👇 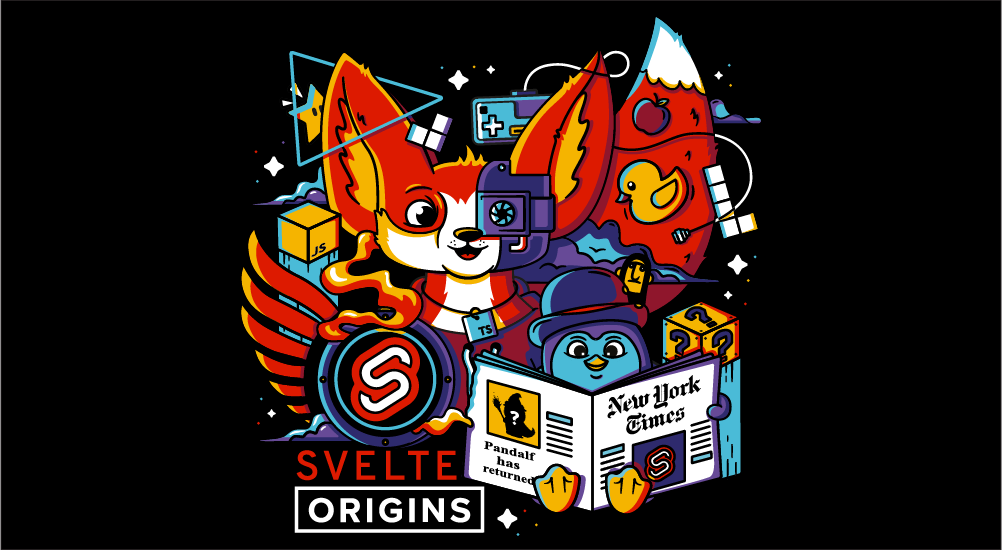 Now, let’s unpack this collage and look at the references, starting from the top:

Gameboy Star: The well known 8-bit Gameboy star that is referenced in many pixel games, such as Mario Brothers.

Vercel ‘triangle’: Referring to the platform for frontend frameworks and static sites, built to integrate with your headless content, commerce, or database.

Gameboy: This element has two unique references, one being a throwback to playing Mario Brothers on your Gameboy. Secondly, it references the OfferZen first love shirt.

Rubber Duck: Referring to the process of ‘rubber ducking’, a method of debugging code where you talk through your coding problems with a friendly duck that won’t judge you.

Cyborg Fox: A reference to Conduitry, an important maintainer whose mascot looks like a fox cyborg.

JS logo, 3D: A programming language that is one of the core technologies of the World Wide Web, alongside HTML and CSS, which is very popular in the Svelte community.

Svelte Logo: The logo of Svelte, an open-source front end compiler created by Rich Harris and maintained by the Svelte core team members.

TS Logo: TypeScript is a programming language developed and maintained by Microsoft, which Svelte supports.

Linux Penguin: Reference to Pngwn, an important maintainer with a penguin as its mascot.

Bowler Hat: Referring to the Svelte Society, which uses a Bowler hat as part of its logo. They are a global volunteer network of Svelte fans that strive to promote Svelte and its ecosystem.

New York Times Newspaper: A reference to where Rich Harris, the creator of Svelte, works.

Pandalf: A sneaky mention of one of our OfferZen characters, Pandalf.

Excited about the shirt? Register for the Svelte Origins premiere. If you are based in South Africa or Europe, you may just receive your own!