A Structured Approach to Prioritise Your Developer’s Career Growth

Many developers say that growth opportunities are one of the most important things for them when it comes to staying in a job. However, for a tech lead figuring out how to cater for everyone’s career goals can be hard. That’s why Julian Springer, Technical and Career Manager at Singular Systems, has set up ‘contribution sessions’ with his developers every month to track progress and solve any niggles before they become bigger problems. Here’s how he does this.

You can download his template for these contribution sessions here!

In our most recent State of the Developer Nation Report, career growth opportunities was one of the things that developers said they value the most at their companies. Julian’s experience as a technical manager has reflected the same. He believes one of his primary responsibilities as a leader is to encourage and support growth for the developers in his team. Otherwise, he says you risk your developers becoming unhappy, and more likely to leave:

“Investing in people is more important than investing in anything else. Personally, all I’ve ever looked for in my life and career is someone to guide me, and found that level of guidance worth its weight in gold. People will be there for you, and go the extra mile, if they know you value who they are as a person.”

Investing in people means taking the time to understand them at a very personal level, and knowing exactly what each and every person needs in order to thrive in their careers — from the roles they want to work towards, to the relationships they want to build with their teams.

But Julian acknowledges that tech leaders tend to have a lot on their plates, which makes genuinely understanding each developer trickier, especially as teams get bigger.

To help with this, Julian’s team at Singular Systems introduced contribution sessions, which are monthly 30-minute touchpoints between a manager and a developer to unpack where that developer wants to progress in their career, and what’s stopping them from taking steps to achieve their career goals.

Since introducing these sessions, Julian has seen a big change in how his team discusses their aspirations, and the practical steps they can take to get there. Here are a few examples of the value these sessions have brought to his team, as well as a guide on how to set up and run your own.

The value these sessions have brought to his team since they’ve introduced them includes:

How contribution sessions help with communication, and growth

One of the most useful things about contribution sessions is the chance to check in as individuals, and communicate about where each developer wants their career to go. Making the space to regularly align has helped the team with the following things:

The point of contribution sessions is to not only focus on how someone can get promoted, but also to support their growth in all aspects of their careers and lives. In Julian’s experience, true career development needs to take all of that into account: “It doesn’t just have to be technical stuff. Soft skills are very important too. It can also be relationship-based — for example, there could be a task that lists how they want to improve the relationships they have within the team.”

Clarity and alignment on expectations

Julian has also found that having these sessions helps bring absolute clarity to where everyone is at, and what each person wants and needs from their roles. If someone in his team at Singular Systems feels like they aren’t sure about this, having this touchpoint makes it easier to figure out a plan forward: “For example,” Julian explains, “one of my devs came to me saying how he was struggling to balance two projects because he wasn’t sure what his role was. I spoke to the respective tech leads on those projects, and he feels way better about it now because he now has direction on what the expectations are and what he needs to do. He also got the chance to communicate what he wants to do, which is equally important.”

Creating more surface area for discussion helps Julian to flag things early before they turn into bigger problems that are harder to solve, and support his team members proactively as opposed to putting out fires in hindsight.

“Before we introduced the contribution sessions, we’d have review sessions every six-months, and people who were unhappy would get to those reviews and just lay it all out — and you’d sit there, shocked, because you didn’t know where it was coming from. The sessions have helped eliminate that completely. We can have a conversation there and then, when problems come up, and it’s made for a generally happier team.”

While Julian’s team has stuck to these sessions well, figuring out how to set up them up sessions came with a lot of trial and error. To help make it easier for other teams who are keen to try Contribution Sessions out, here are some tips from Julian on how to structure them.

He’s also included a template, which you can download here: 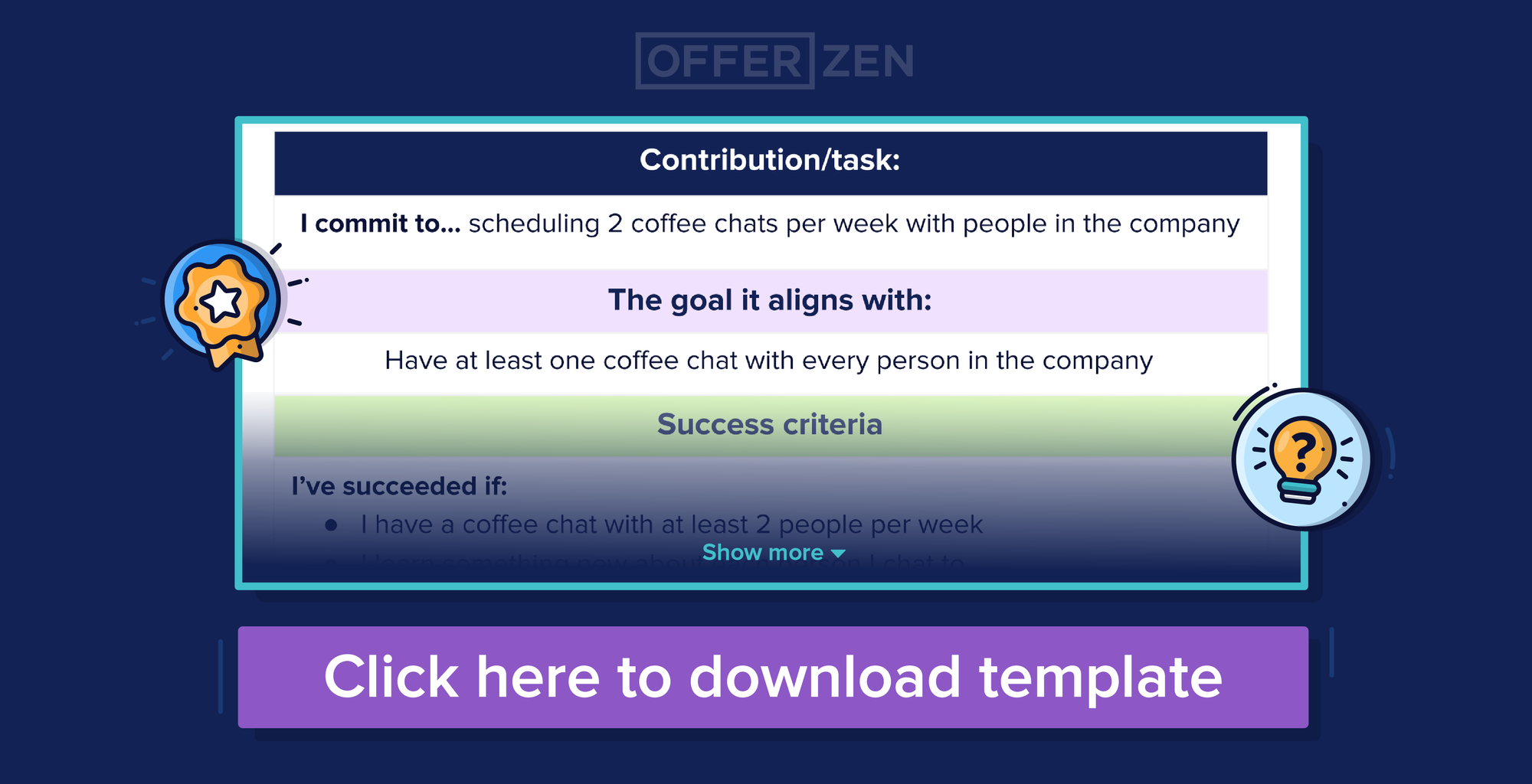 How to structure your own contribution session

First and foremost, it’s really important to understand where your developer sees themselves in the next six months. These goals will set the tone for the contribution sessions to come. These goals are what you’ll measure progress against, and how you’ll know whether or not you need to course correct.

“You can start this discussion by understanding where they want to go with their life. The person may say that they love front-end development, so we would set that as the goal and help them work towards that through the tasks we set later on.”

Next, it’s important to define the weekly or monthly tasks that will help the developer realise their goals. These are the things you’ll track every month. “Ideally,” Julian says, “the tasks are bite-sized, manageable chunks of the bigger goals.” For example, if their goal is to lead a team, one task may be to mentor a junior member on the team for a month and see how it goes.

Six-month goals are useful motivators, but they can be overwhelming to achieve in monthly intervals. Setting bite-size tasks that break those goals into smaller pieces helps Julian and his team at Singular Systems motivate his developers when they’re struggling. It also helps him understand how they want to realise that goal: One person’s idea of being a leader might be very different from another’s. Setting tasks makes it easier to unpack what that looks like in greater detail – and, going back to our example, mentorship is maybe enough leadership to satisfy their goal!

In order to keep track of how the tasks and goals are progressing, Julians starts every contribution session with a 15-minute retro. Here, he spends time understanding what went well, and what didn’t go so well. “We look at: This is what the reality of the last month was — how close did, or didn’t we get to our goals? And then we try to create a new way forward, based on what we’ve learned.”

Retro sessions also help Julian get an idea of what’s preventing someone from realising their tasks, and in turn their bigger goals. In some cases, it might turn out that they no longer want to work towards this goal, in which case there’s an opportunity to re-evaluate their roadmap.In other cases, it might turn out that something else is blocking them. He says: “If you spent all your time doing live support, and didn’t get a chance to get to your actual tasks, that is a red flag. And that should not be your reality. And we can address that in those discussions.”

Finally, Julian spends some time at the end understanding how each person sees their contributions to the sessions by getting them to give a rating from Eager contributor to Superstar. Rather than a scoring system or a structured list of criteria, Julian prefers to go by feeling, and have a conversation about how each person feels about how they are showing up.

“I’ve found that it is good to have a bit of a metric as a touchpoint during the conversation,” he explains, “but I also think being too structured doesn’t allow room for understanding someone’s life.” Having a list of soft criteria, as well as some suggestions for what a manager and developer could do to improve the way the developer feels about their contribution to these sessions, makes this conversation more productive. It turns the focus onto setting up their environment to support them, which helps them feel more comfortable and more supported.

By having these contribution sessions every month with every developer in his team at Singular Systems, Julian has been able to connect with his team more meaningfully, and play an active role in helping them feel like they have all the room they need to grow in their careers. In his experience, building this trust with his team has been the single most valuable thing he’s invested in as a technical leader.

Download your own template of these contribution sessions here!