The Music Blogging Industry has a One-Stop Shop: SubmitHub

Capetonian Jason Grishkoff flips the old model of submitting songs to music blogs on its head: Thanks to his platform SubmitHub, artists now have direct access to the blogs covering new music whilst bloggers get paid for what they’ve been doing for free for years. 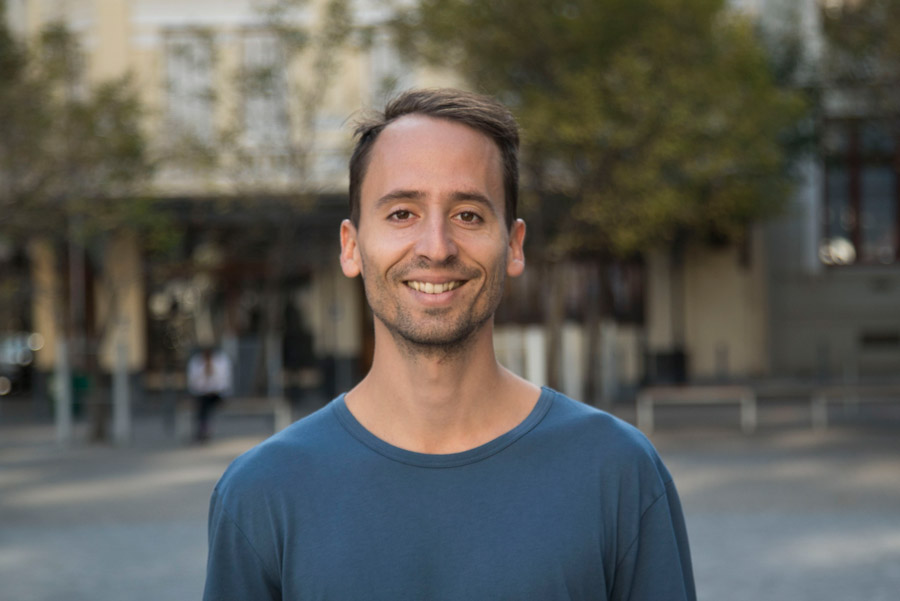 At a time when Apple Music and Spotify have largely redirected music lovers’ focus away from traditional music blogs, record labels still scout through them to find new talent. Jason’s own blog, Indie Shuffle, gets around 200 000 unique views a month. “Before music blogs, the discovery of new music required a lot of on-the-ground-action”, Jason says. “You had to go to small clubs and see who’s rising, find out who’s passing out CD’s on the street.”

Today, the blogs essentially act as the first filter which means that bloggers receive a lot of music from new talent. “If you have a new song that you want to release, you want it to garner as much exposure to up your chances of getting featured on Spotify or BBC Radio playlists”, he explains. Whilst this is one of the main reasons music blogs are still relevant, it also means a lot of (unpaid) work for the people running them.

“I reached a point where Indie Shuffle was getting about 300 email submissions per day.”

Many music bloggers run into the same issue: “If your email address is out there, it’s being sold to people and distributed in mailing lists”, Jason says.

For the Indie Shuffle founder, this took the fun out of blogging. “To deal with my flooded inbox, I created submissions@indieshuffle.com and let a Gmail-filter delete all the pitches that came in - problem solved”, he jokes. At the back of his head, Jason knew that this wasn’t an actual solution and that he was sitting on a lot of potential: “What if I could turn these submissions into 300 articles, 300 reviews, 300 new songs on the blog?”

At the same time, the self-taught coder wanted to learn some new skills and in particular, NodeJS and Meteor. What better way than to delve headfirst into a new project? Working from a co-working space in the heart of Cape Town, Jason put in an entire month of eight-hour-days to build the prototype that would become SubmitHub.

“The goal was just to create an easy way for people to send me music, upload it using a form, add the artist name, song title and streaming link. The music would then show on a dashboard with a play button and a thumbs-up or thumbs-down button - thumbs-up means I’m going to blog it, thumbs-down means nah.”

Once the fundamentals - receiving a song, voting on the song - were working, he linked SubmitHub to Indie Shuffle and began funnelling the onslaught of emails into the new platform. Jason sent his prototype to a few friends in the blogger community for feedback, and their reactions were unanimously positive. In fact, each one of them wanted to use SubmitHub themselves: “I had to rush off and code a way to add other blogs”, Jason recalls.

Essentially, SubmitHub is helping with two big problems in the music blogging industry:

Usually, bands have to do email campaigns that often leave them with really disappointing results. That’s when many artists turn around and hire publicists. SubmitHub is now levelling this playing field: Artists or their representatives can connect directly to the growing list of 300+ music blogs, Youtube Channels and radio stations.

They can filter these by genre and location and see short descriptions about each medium. “The blogger gets to write a little note about what their preferences are and I put a whole bunch of stats on there, like: ‘This blog typically does a blog post or this blog typically just does a retweet’”, Jason explains.

Artists can choose between two different submission options: free credits or premium credits. “With the free credits, you can only select two blogs every four hours, and it comes with no guarantee that anyone will even listen to it.”, Jason explains. The premium option, in contrast, comes with three guarantees:

One, the blogger is going to listen to the song for at least 20 seconds. Two, if they don’t like it, they have to explain their decision for each individual song in a minimum of ten words. “For example: ‘Really great production. I love the build up, but once you hit the chorus, the vocals just felt strained.’ - Boom. Done”, Jason explains. The third guarantee is a 48-hour turnaround: if a blog hasn’t responded to a submission within two days, the artists get their credits back and can use them on a different blog. 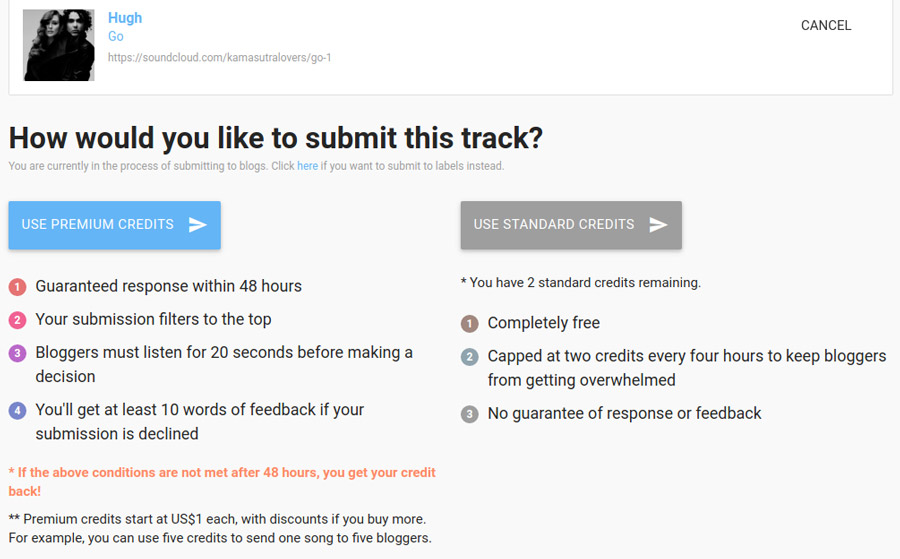 On the blogger side, the songs appear in a list of submissions. They can easily go through the list and play and vote on each song right there. This monetisation model is, in part, a direct response to many artists’ requests for feedback:

“Because I give music a thumbs-down 95% of the time, people want to know why but I obviously don’t have time to explain that to every single one of them - unless! What if they pay me?”

This system seems to work: About two-thirds of all users opt for premium credits. Half of the earnings go to SubmitHub whilst the other 50 cents go to the bloggers. A blogger could make about $500 per month for actually listening to music. In total, SubmitHub pays around $38 000 to the media on the platform every month. 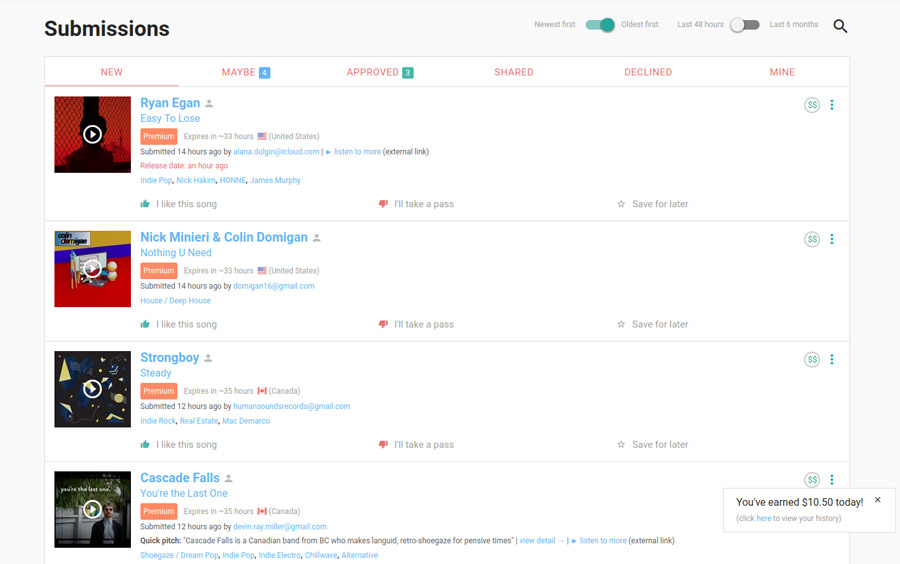 “I also give out a lot of free credits when artists hit thresholds”, he says. “I’ll say: ‘Hey, it looks like you’ve sent out 20 free submissions, here are five paid credits for free. Have fun.’ I found it’s a really effective branding tool.”

Whilst the platform is making both the artists’ and the bloggers’ lives a whole lot easier, there are still a couple of pain points that Jason addresses openly.

“SubmitHub receives roundabout 7 000 submissions a day of which 300 to 400 get approved. That means, there’s obviously also a few thousand rejections”, he explains. That’s why SubmitHub’s support page manages artists’ expectations in advance:

“We warn them that they are about to go through a roller coaster of emotions: ‘These guys will tell you your music sucks. Don’t panic, learn something from it.’”

On the other side, bloggers don’t always take as much care with their feedback as they should. To save time and possibly to avoid the discomfort of having to give artists critical feedback, some of them have started to find ways around this requirement by simply copying and pasting across different submissions. 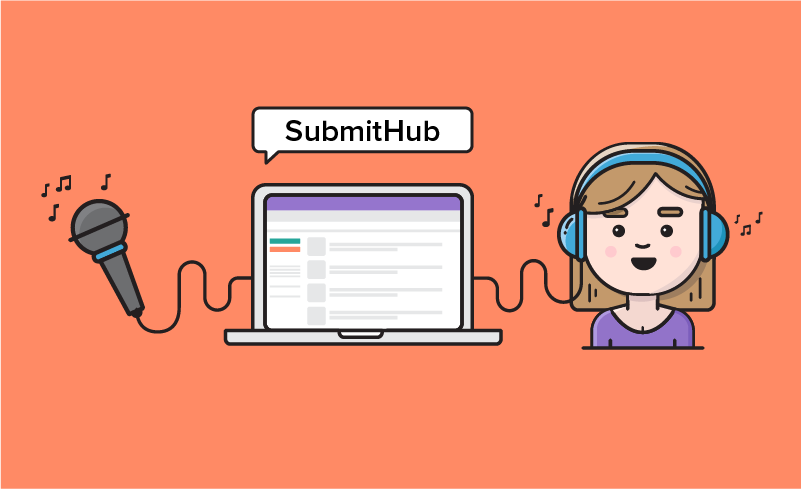 “That’s one of our big challenges”, Jason says. “I started with a copy and paste formula that would detect if anyone was chiselling.” Some bloggers then started to add a period for each new submission, just to throw off the formula. That’s when Jason opted for the Levenshtein formula which doesn’t just compare each character but essentially looks for similarity. If too many of a blogger’s responses to different submissions have around 60 or 70 percent of similarity, it will alert the admin.

The admin then receives an email that contains the respective blogger’s last 50 feedbacks. Again, Jason has to deal with his users sensitively to keep everyone on good terms. “So I would write them something like: ‘I know you didn’t do anything on purpose but we are watching you!’”, Jason says. If his diplomacy doesn’t bear any fruit, a blog can eventually get kicked off the platform - something that happens about once a month.

Fights with the PR Industry

Jason is quite aware of the fact that not everybody is a SubmitHub cheerleader: “The first and biggest group that was really agitated were the publicists”, he says. An entire arm of the PR industry focused on getting musicians on the radar of inundated music bloggers. SubmitHub essentially tore that wall down because now musicians can reach media themselves - for a lot cheaper.

“Interestingly though, our biggest spenders are - you might have guessed it - also publicists. They just don’t tell their clients that they are using SubmitHub and then come back with great results.”

Quite aware that they won’t be able to hide this new method forever, the PR industry’s criticism against SubmitHub remains quite vocal. “There is a lot of talk about how the system is messing up the industry, how it’s doing everything wrong and how it’s not right that bloggers would accept money from artists”, Jason explains. “This is a slightly ironic statement coming from a publicist who charges artists quite a lot more money to get in touch with bloggers.”