What Monetary Benefits do Senior South African Developers Want from a Standout Offer?

A compelling job offer is about more than just a competitive salary. Benefits are a great way to make your role more attractive to software developers. Here’s what benefits South African senior developers care about.

Why you should hire South African developers

South Africa has a massive pool of available talent: Google’s e-Conomy Africa 2020 report estimates that there are 121 000 South African software developers, a third of whom are looking to change jobs in 2022.

This largely has to do with the favourable tax and cost of living setup in South Africa.

That means even a lucrative senior developer salary by South African standards is more affordable than the industry average in Europe.

While the tech hiring market has cooled down from its record highs, demand still vastly outstrips supply in local markets and matching market-related salary levels alone is no longer enough.

Standing out in this competitive environment means:

Monetary benefits can vastly increase the attractiveness of your offer:

1 in 4 South African senior developers don’t receive any common monetary benefits in their current roles. That means companies who include them in their package gain an edge when competing for the best talent.

We asked South African senior developers what monetary benefits they currently receive and what others they desire, so that you can make a standout offer. 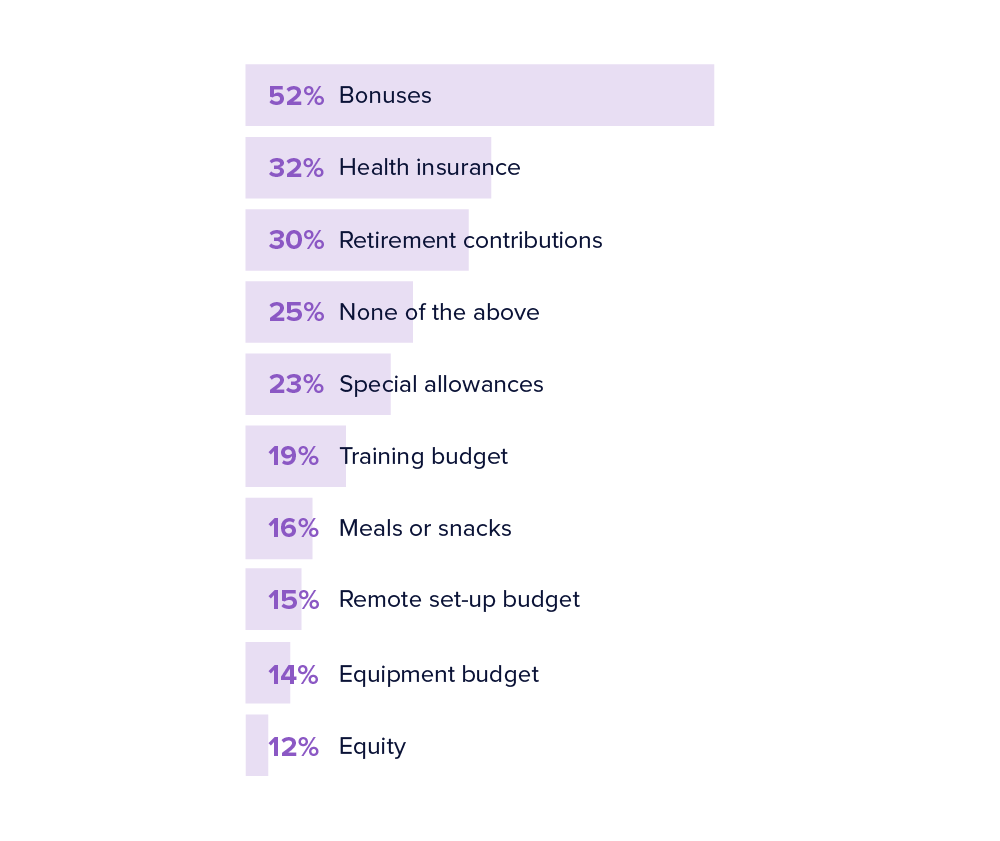 The setup of the country’s healthcare system explains why this is such an important benefit: Private health insurance is not a legal requirement in South Africa, but has a significantly higher standard than the public healthcare sector offers. It can also be quite costly, which is why a company-provided plan or even contributions are so attractive to developers.

Likewise, South Africa does not offer universal pensions nor does it require contributions to a pension fund. That means that individuals are responsible for their retirement planning and meeting these costs.

Despite their importance in the local context, less than a third of senior software developers receive either benefit in their current roles. Including them in your salary package is a sure way to make your offer more attractive.

Administering these benefits internationally can be quite challenging. Working with an Employer of Record, like PlayRoll, can make this process simpler and ensure your compliance with local regulations.

If you’re looking to take things up a level, consider giving your seniors equity.

Fewer than 1 in 8 senior developers receive equity in their current companies, so job offers including equity are well placed to stand out in the race for the best talent.

Apart from being a highly desired benefit, it can also help you keep people with you for the long-run by giving them a stake in the technical solutions they build for you. That way they win big when your company does.

Equity is not an option for all companies but that’s not to say that you can’t make a standout offer without it. A clear investment in their remote setup and career growth is also really important to South African software developers.

Your monetary benefits are a great way of showing senior developers that you’re committed to their growth: Give them the resources they need to continue levelling up.

While an education budget is one way to support developers’ career growth, it shouldn’t come at the expense of other monetary benefits. In fact, they’re the only benefit where seniors who receive them outnumber those who desire them from their next role.

Set up your team for remote success

Last but not least, your monetary benefits can ensure that your team has everything they need to succeed in a remote setup and make the maximum impact on your mission.

More than half of South African developers work in a fully remote setup, while another 41% split their time between their homes and office. However, only 15% of senior developers receive a budget for their remote set-up or equipment, and only 1 in 4 receive special allowances to cover their internet and mobile costs.

The majority of South African software developers cover important work expenses out of their own pocket, which means they may not always have what they need for maximum productivity.

For example, rolling blackouts are a common problem in South Africa. Locally, this is referred to as ‘Loadshedding’. Internet connectivity is one of the first things to drop during the often several hours-long blackouts.

In the South African context, it’s crucial to ensure a reliable internet connection and battery backup.

Providing your developers with fibre internet and a UPS (uninterruptible power supply) are good ways to keep your team connected when the power is out.

So far, we’ve looked at the monetary benefits that will help you make a standout offer to senior developers.

At the end of the day, it’s important to remember that every individual’s context is different and that salary and benefits are only one part of an attractive offer. Additionally, salary should not come at the expense of non-monetary factors that are also part of an attractive role like a great work-life balance, an exciting mission and good management.

Data used in this article is taken from OfferZen’s 2022 State of the Software Developer Nation Report and 2022 Data Report: Software Engineering Hiring Trends in South Africa unless referenced otherwise.

Check out our blog for more resources on hiring developers.

200+ developers are waiting for you each week
Get access to a curated list of skilled developers, ready to interview.

200+ developers are waiting for you each week
Get access to a curated list of skilled developers, ready to interview.