How We Ran a Virtual ‘Murder Mystery’ Team Event

Because we’re quite a close-knit team, we’ve found it hard not seeing each other at the office every day for the last few weeks. That’s why our Events team decided to run a completely online team bonding event. Here’s the step-by-step process we followed to set up a ‘murder mystery’ for our team using only Slack, Zoom and a whole lot of imagination!

I’m the Experience Designer on the OfferZen Events team. Because in-person events have been cancelled or postponed across the world due to the COVID-19 outbreak, I’ve spent a lot of time over the last few weeks thinking about how to keep people connected through digital event experiences.

Inspired by a series I’ve been watching, I decided to host a ‘murder mystery’ styled event for the OfferZen team to see how the experience would play out online.

I learned quite a bit in the process, and wanted to share some of these tips to inspire other teams out there who are looking to have some fun together over the internet.

Running the event required both a pre-game set-up and the actual execution of the game. Put on your detective hats and get that magnifying glass ready – here’s what these processes looked like in more detail.

As excited as I was to dive straight into setting the event up online, I knew that planning out every step in as much detail as possible was the key to getting everyone excited and running the event smoothly.

1. Decide what you want people to discover

This is the first and most important step because it’s at the center of the whole game. Essentially, you need to clarify here what you want people to do in order to win the game.

We broke our murder mystery down into three parts:

2. Add details to the story

I really enjoyed this part and took the opportunity to be as imaginative as possible. We decided to feature all of the teammates who were attending the event as characters in our plot to add to the fun.

Using the framework described above, we tailored the story to appeal to our team’s general sense of humour. For example, one of our teammates loves crocheting, so we made her the villain who murdered our Head of Marketing when he found out she’d hacked into our social media platforms and was spending our ad budget on advertising her crocheted items!

Now that you know the story, you need to think about how you’re going to guide the team to its resolution.

We found it quite fun to put together clues that would both lead teams in the right direction and throw them off the scent.

To keep the game exciting, we figured out ways to share these clues in as many mediums as possible, including videos, voice notes and Photoshopped pictures.

Pro tip: Before you get too inventive with different types of clues, think about the platforms you’re going to run the event on and make sure you’re able to share them on there.

Off the back of the last tip, we found that because digital events are so popular at the moment, there are loads of tools out there. The best advice I have for choosing one is to understand what you need the tool to do for you to make your event work the way you want it to.

For our murder mystery game, we needed:

Based on these needs, we decided to go with Zoom and Slack – both of which our team is already familiar with using.

As with anything, we find it’s always useful to run ideas past someone else to check for any gaps in your thinking. We found this to be especially important when setting up a murder mystery where the plot needs to be very precise.

Note: If you enlist the help of a teammate, they won’t be able to play the game because they know the answers! If you really want them to play along, I found checking things with my mom to be just as useful.

6. Build up excitement for your event!

After all the hard work, it’s really exciting when you can launch your event!

Note: Sending out these messages before the event is helpful to keep it top of mind for people. With everyone working from home, it can be easy to forget about things when you get sucked into work or have family responsibilities to take care of.

When the day of the event finally arrived, I found that setting up every detail in advance was the key to winning.

Prepare your talking points and written messages in advance

As the host, I found it really useful to prep a master doc that had all the details I would need to reference throughout the game. For the murder mystery, I found it particularly helpful to have these details clearly mapped out: 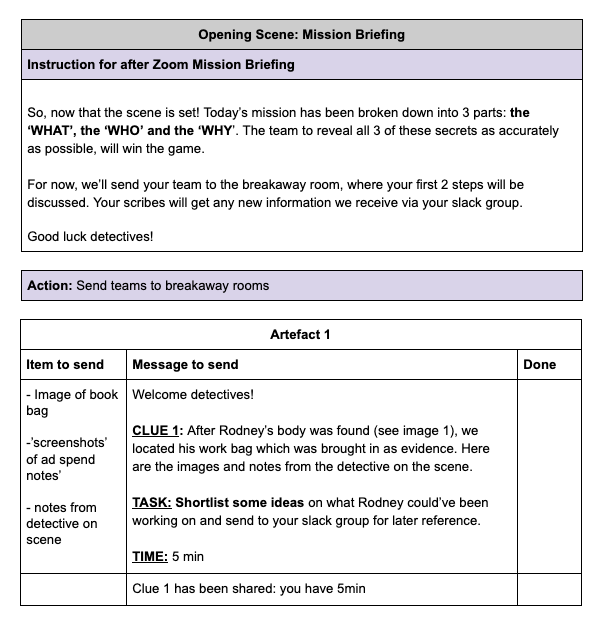 Using features like breakout rooms and broadcast messages can be a bit intimidating if you haven’t used them before. Make sure to test all the functionalities before the event starts so that you’re confident navigating them.

Have fun and remember to breathe!

Just because I couldn’t participate myself, didn’t mean that I couldn’t have as much fun as everyone else on the team! I set up my Zoom background to look like a ‘mission control’ center, and donned sunglasses and an FBI cap. This helped get me in the zone and added some extra entertainment for the team.

Finally, once the game officially started, I found that it was really important to breathe and trust myself that I had everything set up as well as possible. With so much on the go, it could have been very easy to get into a tizz, but following my document and taking things one step at a time was a great way to keep everything under control.

Overall, our online event was a great success. The ending was very dramatic and everyone had a lot of fun. We learned a lot of really valuable lessons along the way, which we can’t wait to apply to our next virtual event!