How I Used Octane to Supercharge my Laravel App

Laravel at a small scale is really accessible, but when scaling Laravel applications they slow down significantly and frustrate users. I used Octane to solve this and decrease my banking app’s response time from 1 second to 46 milliseconds. Here’s how I made my app perform 22 times faster without changing any code.

Working with Laravel for over five years, I’ve developed several applications, from simple blogs to CRUD applications and high-traffic ad networks. One of these was a simple banking application where speed was crucial; otherwise, transactions time out.

As the app grew bigger each month, with hundreds of new users, requests and transactions per minute, it stopped scaling as efficiently as I expected. We temporarily solved the scaling issues by adding a 4 vCPU 8 GB server.

However, this wasn’t a sustainable solution because we couldn’t increase the server size without paying more.

Octane provided a much better and cheaper solution that enabled me to keep the services providers and packages I’d used without compromising on speed.

To understand my solution, you first have to understand why the app ended up becoming slower and slower.

Laravel was created to be accessible, but the downside of its accessibility is that it’s slow to load.

The Laravel service container gave me a clean approach to injecting custom classes into functions anywhere in my code.

This is how I used the service container in my banking app:

The Service Provider, a class that implements two classes, boot() and register(), explicitly tells the Service Container what to bind to and register before the request is processed.

In this example I told the application to bind the VisaCardClient class to a new instance of that client. Wherever the class I bound is type-hinted, Laravel automatically replaces the method argument with the instantiated class defined by the bind callback and I don’t have to declare the same new VisaCardClient everywhere I need the instance, reducing code complexity.

Drawbacks to this approach:

The framework had to load all the Service Providers and resolve all the bindings by loading and running all boot() and register() methods before serving the request. For each request, each time a user visited the homepage or issued a POST request, the Service Providers’ boot() methods were run. This added a few tens of milliseconds to each request.

You may think that a few milliseconds worth of instantiating and loading the Service Providers aren’t worth optimising, but those milliseconds add up when more and more requests per second build-up.

Another accessibility point that counts in Laravel’s favour is its well-known relationship with package makers. Anyone can write a few lines of code, publish them to Github, install a package and use that functionality out-of-the-box. For example, in my banking application, I used Spatie’s Permissions package so I wouldn’t have to write a permissions system from scratch, reducing my time to ship a feature that lets teams manage their members’ permissions.

I use a lot of packages from trusted sources, like Spatie. They have great support, the projects are well-maintained, and they have a lot of packages that solve many issues easily and quickly. Like the permissions package, there are loads of other packages I imported when building my app. This increased the time it took for the application to boot.

The more third-party packages you install, the more time it takes for your Laravel application to boot, increasing each request’s booting time.

The “app booting” involves loading all service providers and running their boot() methods. 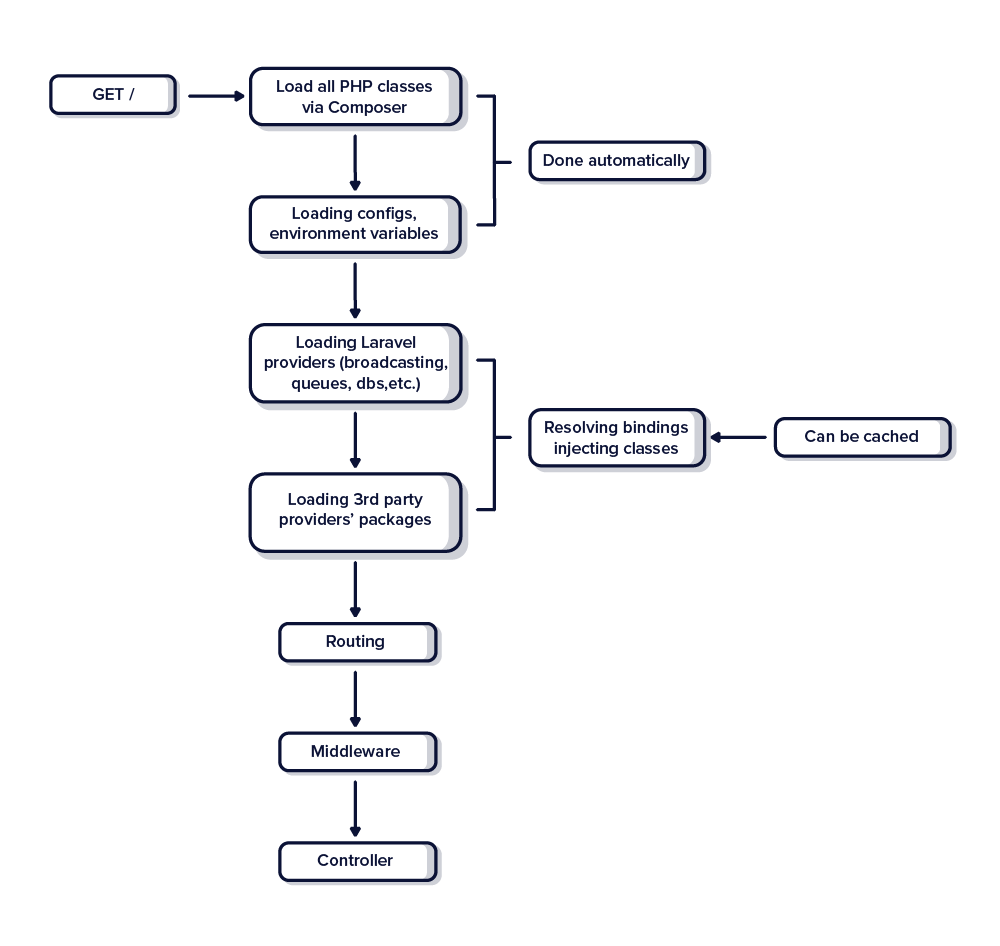 Octane tackles these issues by loading the Service Providers and packages only once, avoiding the need to instantiate them each time and saving a lot of computing on each request.

Octane caches the Service Providers’ load process on the first request, and subsequent requests are served from memory.

Not only does Octane ensure the bootstrapping process is properly served from memory, but when paired with Swoole or Roadrunner, it provides blazing web-serving speed!

In my case, Octane was the perfect solution. It reduced the overall computing overhead of every request. Over 99% of requests were resolved below 200ms, while the average response time was around 50ms. This was 22 times faster than before.

Swoole has more features than Roadrunner

To install Octane, you need a few prerequisites. One of these is either Swoole or Roadrunner. They are both highly-efficient web servers. While they differentiate a bit in terms of what they need to run, they do the same thing at the core. Swoole is a whole extension, making it harder to install on operating systems that do not have access to PECL, but it’s super rich in features. Roadrunner can run anywhere but lacks some features that Swoole has, such as support for tables for hot-cache.

I used Swoole as it has in-memory tables, allowing me to cache data directly within it. The custom Swoole tables for caching, or parallel processing, make the data available faster than using a usual in-memory store like Redis.

In our case, to test locally on a Mac, we had to use brew:

In your existing or clean Laravel project, Octane is super easy to install:

The base configuration files can be copied into the project with the following command:

And… that’s it! If everything is alright, you can try running the Octane Serve command to start the server:

All you have to do is access your server through the provided link in the console. Each time you access the application, you can see the requests being registered and how much time they take:

Beware of memory leaks when using Octane. As the process is never closed between requests and the service providers are cached, you can easily introduce memory leaks by not being aware of your code.

Take this following (absurd) example, where our VisaCardClient service gets one of its arrays filled with a random string on each request:

You’d be tempted to say there’s nothing wrong with it. However, as more and more requests pass, your octane:serve process will use more and more memory. While the service is cached, it is not rebuilt between requests, allowing the data to grow until the process gets recreated or it runs into an OOM error.

There isn’t a magic formula; you just have to be aware of what your code does. I highly recommend running stress tests with various tools like Grafana K6 to ensure your process memory doesn’t increase.

Laravel helps to code in a cleaner way, but this advantage can impact your production performance. Thanks to Octane, we can still take advantage of accessibility while having a performant production application.

While Octane does most of the hard work, it doesn’t take the entire load, which is where automated testing comes in. But that’s a blog post for another time!

Alex is a minimalist Laravel developer, full-stacking with AWS and Vue.js and sometimes deploying to Kubernetes. 🚢 He’s the mastermind behind @soketirealtime, a college dropout and open sourcerer 🧙‍♂️ dedicating his life to share knowledge and useful code. He also helps businesses migrate to the cloud and implement better solutions with the Laravel ecosystem.