Close menu
Tech Career Insights: What It Takes To Be a Senior Developer in the Netherlands
Share:

What It Takes To Be a Senior Developer in the Netherlands

It’s expected for senior developers to have a certain number of years under their belt - more experience in an industry or tech stack means a higher seniority level, right? The data from our recent State of the Netherlands’ Developer Nation Report shows that it’s not that simple. Here are other factors that senior developers have in common.

The acceleration of existing tech trends – especially remote work, eCommerce, and digitisation – means that senior developers are now more in demand than ever and have an increasing number of job opportunities available to them.

The tech industry’s supply-and-demand dynamic is vastly different from other industries. There are more roles than there are developers to fill them - especially in fast-moving startups. This means that developers often have to take on responsibility early on in their careers.

In addition to that, the tech industry in general is a fast-paced environment where new languages, frameworks, and tools regularly enter the market. It’s not uncommon to have developers with several years of experience just starting out on a new tech stack. As a developer, you don’t necessarily need to have prior knowledge of a particular language to master new tools – but experience helps with learning new languages fast.

Many job specs, however, are still based on the assumption that years of experience equals skill level. They don’t take the tech industry’s fast-paced dynamic into account. 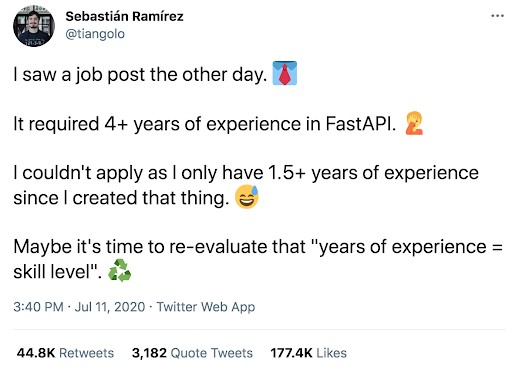 Seniority in tech is determined by more than mastery of a set of tools or skills. Senior developers need to be masters of their technological domain, but are also expected to apply their skills to business problems and work to bring out the best in those around them.

Sadhana Gopal, Engineering Manager at Independer, thinks that signs of seniority are ownership, entrepreneurial spirit and “the wisdom to not get taken in by ‘new and sexy’” while still putting a foot down if they really see business value.

“Essentially, technical jobs consist of 3 paradigms – people, process and technology. Most people are stronger in one. The key is to realize where your natural strengths lie and try to amplify it. However, it is important to have strong foundations in all 3 so that you are the T-shaped professional who can add value to your team and your organization. In each of the 3 arms, you can find interesting and challenging roles should you seek to create impact.”

A developer’s seniority is more than their years of experience

In our 2021 State of the Software Developer Nation Report, we asked developers in the Netherlands whether they consider themselves junior, intermediate, or senior. The results were super interesting: 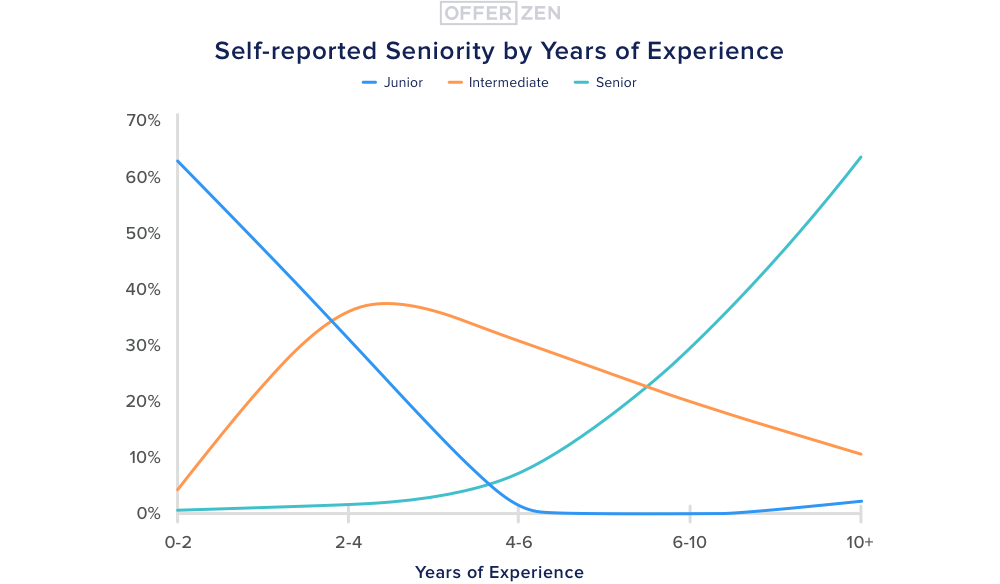 Focussing on the averages, everything still looks pretty straight-forward: Self-reported junior developers have less than 2 years of experience coding professionally, intermediates reported 2 to 6 years and seniors more than 10.

A closer look at the data reveals something interesting:

Other factors that self-reported senior developers have in common are:

Let’s look at each in more detail.

Some developers are taking on senior positions from an early age

Just over one fifth of senior developers in the Netherlands are aged 30 or younger, showing that a significant proportion of young tech professionals are taking on responsibility early on in their careers.

For comparison: The same age group also holds 80% of all junior developers and 68% of intermediates.

What else could be giving senior developers an edge? The data suggests that it’s a head start.

Senior developers have an early start

Senior developers are keen to keep their skills sharp

Tech’s fast and dynamism means that senior developers are expected to learn new languages throughout their careers to remain relevant in their industry. Sergii Maliarov, Coding Architect at Cognizant, explained the importance of learning to his career stage:

“It feels like Alice in Wonderland - you need to run as fast as you can, just to stay in place. You have to learn all the time. Every year or two, I see that I’m missing something - that I need to study.”

While developers at all career stages are committed to learning, senior developers face additional challenges:

“For example, eight years ago, to be a qualified senior developer, you needed a skill set, which is maybe like 50% of the skill sets that you need to have now to be able to answer the questions.“ (Sergii Maliarov) 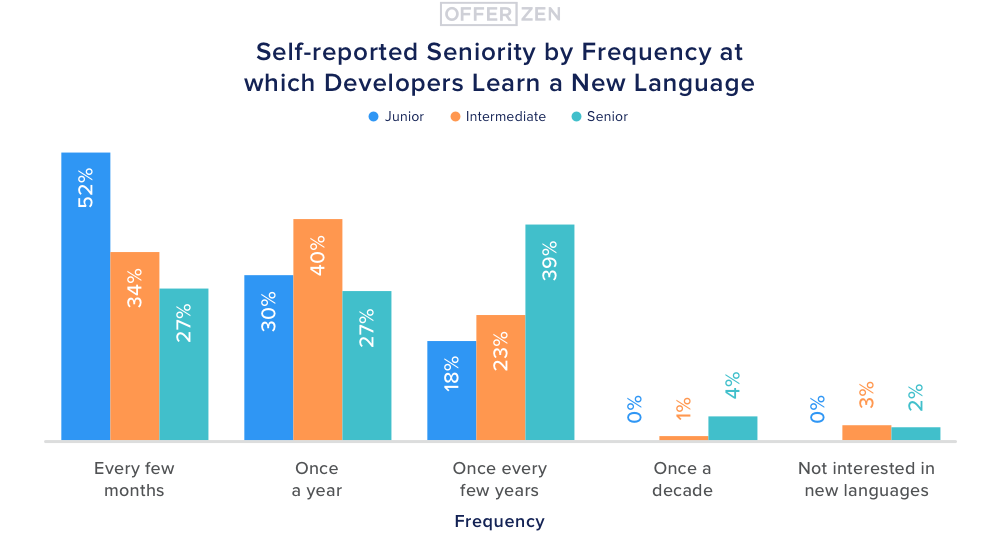 54% of senior developers indicated a desire to learn new languages every year and 39% still indicated that they learn a new language every few years.

More than half of senior developers code as a hobby

The fact that 57% of surveyed developers code as a hobby sets them apart from other professions. It’s hard to imagine lawyers spending their free time pouring over legal theory or accountants using their weekends to study tax reports.

Why do developers code as a hobby? It’s easy to enter a flow state, there’s a clear link between practice and mastery, and it’s rewarding to make cool things that people want to use. Coding is a creative pursuit where developers can test their skills and explore tools they may not get to use in their day-to-day work.

The data points to a mindset that sets seniors apart from their junior and intermediate developers: Senior developers are willing to take on responsibility from an early age, and demonstrate a commitment to their craft. They make time to level up even if they can’t learn as frequently as junior developers. Most importantly, senior developers love what they do and their love of coding extends beyond the workday.

The insights of this article are based on our 2021 State of the Netherlands’ Software Developer Nation Report, and represent the 501 developers who participated in the survey, not the entire industry.