Leadhome Changes The Way We Are Buying And Selling Homes

Leadhome has moved the process of buying and selling a house online. Buyers can look through properties, book viewings with the owners and make appointments with real estate agents. Instead of having to wait for office hours (Leadhome’s operating hours are 7am to 9pm on weekdays and 8am to 5pm on weekends), all this can be done on the website - a simple concept that seems to hit a nerve with the customers: Nearly half of all their client engagement happens outside of the normal 9 to 5.

In addition, Leadhome’s agents don’t work for commission. Instead, every home owner who has sold their property through Leadhome is charged a fixed fee of R29,995 plus VAT - no matter the value of their estate. Regular commission fees, by contrast, stand at around 5% to 7,5%.

They also encourage homeowners to do the viewings of their properties themselves. “98% of our clients prefer this. They’re not expected to negotiate, but simply to open the door and allow potential buyers to walk through. Sellers and buyers find this surprisingly enjoyable”, Marcél says.

“Homeowners obviously know relevant information that an agent doesn’t, like where the geyser is and whether the neighbours are loud.” 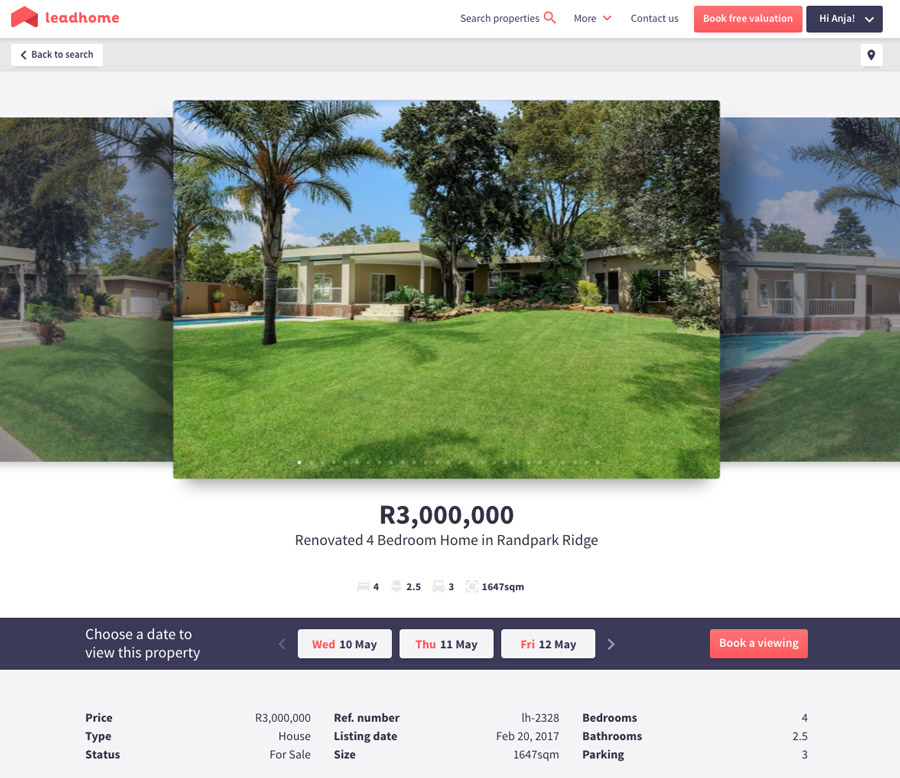 An online platform of this scope allows for transparency that is not usually part of buying or selling property. “In the traditional real estate industry, there is no information on how popular my property is, how my house is being priced and where I am standing”, Marcél explains. The new dashboard called “Simpli” gives clients complete transparency, 24 hours a day.

From Finance To Real Estate

In his previous life, the co-founder of Leadhome was an investment banker focusing on mergers and acquisitions with Deutsche Bank. Despite really loving his career, the studied finance manager noticed that something was missing. “My dad and his dad had been entrepreneurs before me. I think it was just in the genes”, he says. “As an investment banker, it didn’t really feel that I was building anything.” That’s why, in 2014, he decided to take the plunge and quit his job to pursue new adventures. 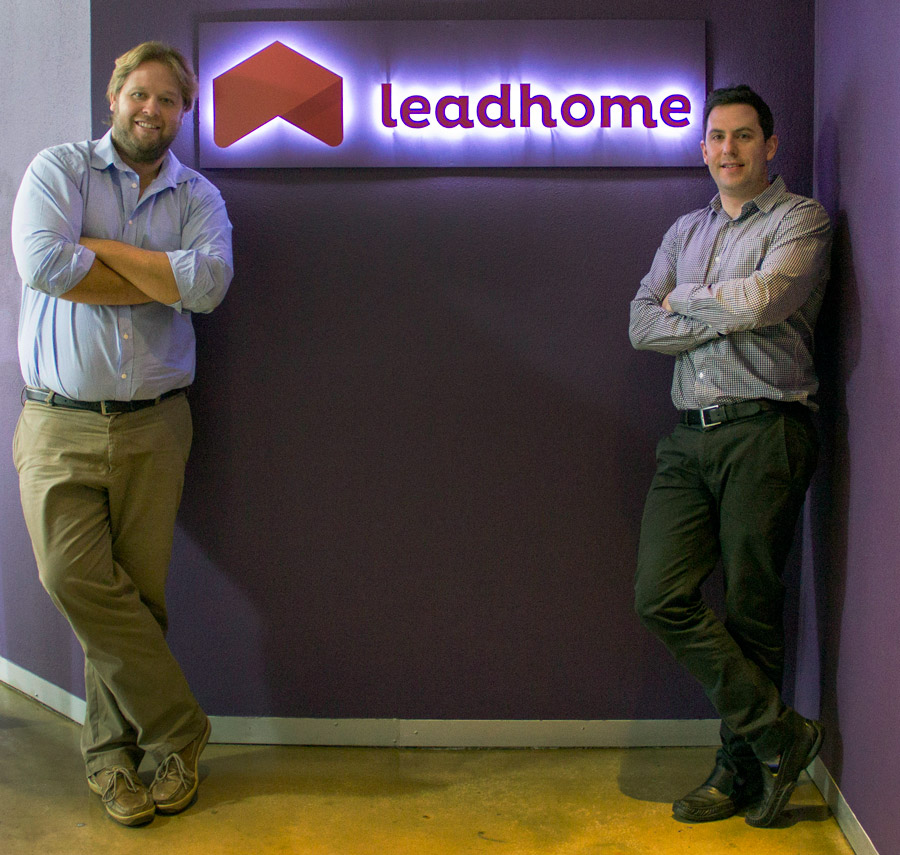 A few months later, Marcél received a visit from his university friend Harry Hattingh. Harry had been working as a broker in the commercial real estate industry and had sold a few houses for his parents’ friends. “We had a braai at my house when he started talking about an opportunity in the property business. I thought to myself: ‘‘Heck no! Who wants to be a real estate agent?!’” However, after giving it some thought, Marcél started realising the opportunities of an industry that had largely fallen into disrepute: “One: It charges an enormous amount of money for the service they deliver and second: clients and consumers are always unhappy, they always end up feeling hard done by.”

The next step for Marcél and Harry was to refine their understanding and assumptions of the industry and pin down their new business model for buying and selling properties. “Beginning in September 2014, we met with over 100 buyers and 100 sellers of houses”, Marcél recalls. They set out to learn everything about the consumer experience they could: How did clients make contact with their estate agents? What drove them to choose one agent over another? What platforms did the buyers use? Answering these questions about the user experience helped them to adjust their own processes. 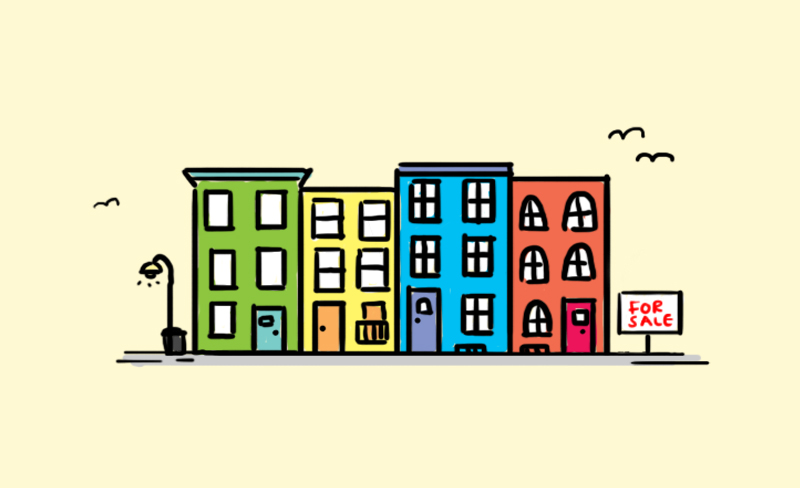 It’s also this intensive research that shed light on one crucial misconception they had. “Our initial idea was to take the middleman out and to develop an online only model instead”, Marcél says. “But despite their often questionable reputation, real estate agents turned out to be the lifeblood of the industry.” The duo learned that, first and foremost, clients want to know that they are getting a good deal and are not being ripped off. “We very quickly realised that the magic of real estate and selling properties really lies in the agents and their ability to assist people in the negotiations around what essentially is their most valued asset”, he explains. “They hold hands. They are incredibly important to build trust and ensure that the property is sold for the highest amount possible.”

In addition, Marcél and Harry also worked to ensure that Leadhome’s agents were the best middlemen possible. “All our agents are tertiary educated with degrees like an LLB or a Finance Honours”, Marcél explains.

“We look at our agents as partners and they are incredibly qualified people who all hold equity in the business.”

Taking the Idea to Market

To get going, Marcél taught himself some basic web development skills and built the first Leadhome website himself. “We launched on the 25th of November, out of my kitchen, with a mass email to all our contacts - that went down really badly”, he remembers amusedly. People didn’t take particularly well to being spammed. “I think on day one of the business we were pretty despondent but we quickly changed tact and slowly started gaining traction.”

The first few months took a lot of hard work and long hours: Harry and Marcél manned their online chat service from 6am in the morning until 10pm at night, made all the calls, did all the scheduling for house viewings, and went to actual face to face meetings with all their potential sellers. Thanks to Harry’s experience as a commercial real estate agent, the first meeting with a client ended up with a sole mandate for 90 days. After one month of digging in their heals, Leadhome made their first property sale right on New Year’s Eve 2015.

Thus encouraged, Leadhome had to go into the next phase and back up their ideas with solid tech. “We always knew that we wanted to build a tech business to create a really great consumer experience and to make our agents really efficient”, Marcél says. But for this, his cobbled Wordpress-page wouldn’t do. That’s why they brought on John Murray, a Cape Town developer OfferZen connected them with.

Being the only tech-head on deck, John was responsible for a task that really required an entire team. “My two major challenges were to build on multiple products simultaneously and identify the right priorities”, he remembers. Then he slowly began adding members to his team. “I started to build a brand new website from scratch and had to implement some of the basic functionality. I knew we would need some additional skills for the other tasks, so I used my network to bring in some extra people”, John says. Over the past year, he has added two software devs and a designer to help him build the platform. They’ll also start growing the rest of the team soon, given that they have 18 months worth of track record and revenue behind them. At present, the team consists of 17 staff members and is looking to double this number within the coming six months - including the dev-forces. 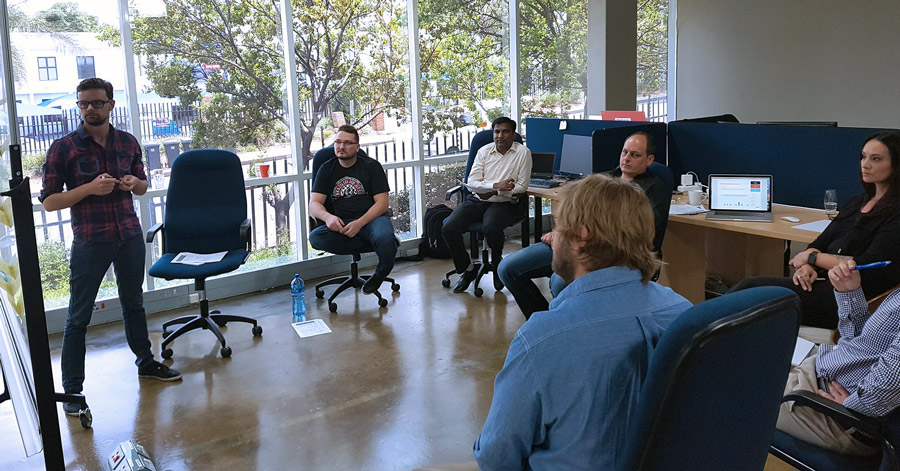 One of the reasons for this radical change in Leadhome’s hiring behaviour is the intrinsic nature of the industry: On average, it takes 35 to 40 days to sell a property. The transfer of the property into the buyer’s name then takes another three months. Since Leadhome only takes their fee after a property has been sold, this makes the working capital cycle around four to six months long - a lot of time to wait on making revenue that is not making scaling decisions any easier. “The quote ‘Running a startup is like building a plane whilst busy flying it’ is incredibly apt”, Marcél says, laughing.

The continuous chicken and egg question is that of which team to add to first. “Agents are the revenue earners. As agents sell houses, we earn revenue. When we earn revenue, we can appoint more developers which then allows us to develop technology products quicker. As the technology products come online, our agents get more efficient and sell more houses. So we kind of have a virtuous circle”, Marcél says.

This seems to work: The Leadhome CEO quotes 128% quarter-to-quarter client growth and says that his company has made it into the top 8% of all real estate agencies in their respective operating areas.