Close menu
Audio: How to Build a Succession Plan and Make Your Team More Autonomous
Share:

Being a leader can make it hard to take time off, and feel confident that your team will continue to thrive without you there. Chiedza Muguti, Head of Product at Penta, experienced this first hand when she had to take 10 weeks of medical leave, and saw how her team’s systems failed when she wasn’t around. Since then, she has set up a competency framework and a succession — or handover — plan that she uses to help her team succeed with or without her there. Here, she shares what this framework looks like and how it’s helped her team become more independent.

Chiedza has shared a downloadable competency framework template for you to use with your own teams! Check it out here.

Chiedza is the Head of Product at Penta, a German digital banking platform that helps SMEs set up and run their business’ finances. As a leader, she is in charge of the end-to-end product development process, and oversees everything from product management, to product design, all the way to product marketing.

“As I was writing all of the handover notes, I realised that there was no clear person who I could say, ‘This person is best equipped to do X in my absence’. I ended up sharing the responsibilities across a group of people, without really knowing who would be best at what. It caused complete chaos for everybody.”

As much as she would’ve liked to have a plan in place, she acknowledges that being in charge of a team and having other, more immediate problems made it hard to justify taking the time to intentionally delegate responsibilities to help her team to run independently. It’s only when she needed it that she had to put in the time — and she thinks that most leaders have a tendency to lead like this.

In her experience, this means that leaders are more likely to burn themselves out, and take learning opportunities away from their team by prioritising doing over delegating. “I did that a lot when I was younger”, Chiedza explains, “and felt the heaviness of that responsibility; that I always needed to be on, and be there all the time.”

That’s why Chiedza has set up a competency framework for her team – a spreadsheet of roles and their relevant competencies, that helps her support specific growth in her team. She uses this to help develop and track her team’s progress in different areas so that if she ever has to take time off, she knows who the best people are to take over her various responsibilities.

Here’s what her competency framework looks like, why it helps her as a leader, and how she thinks about it. 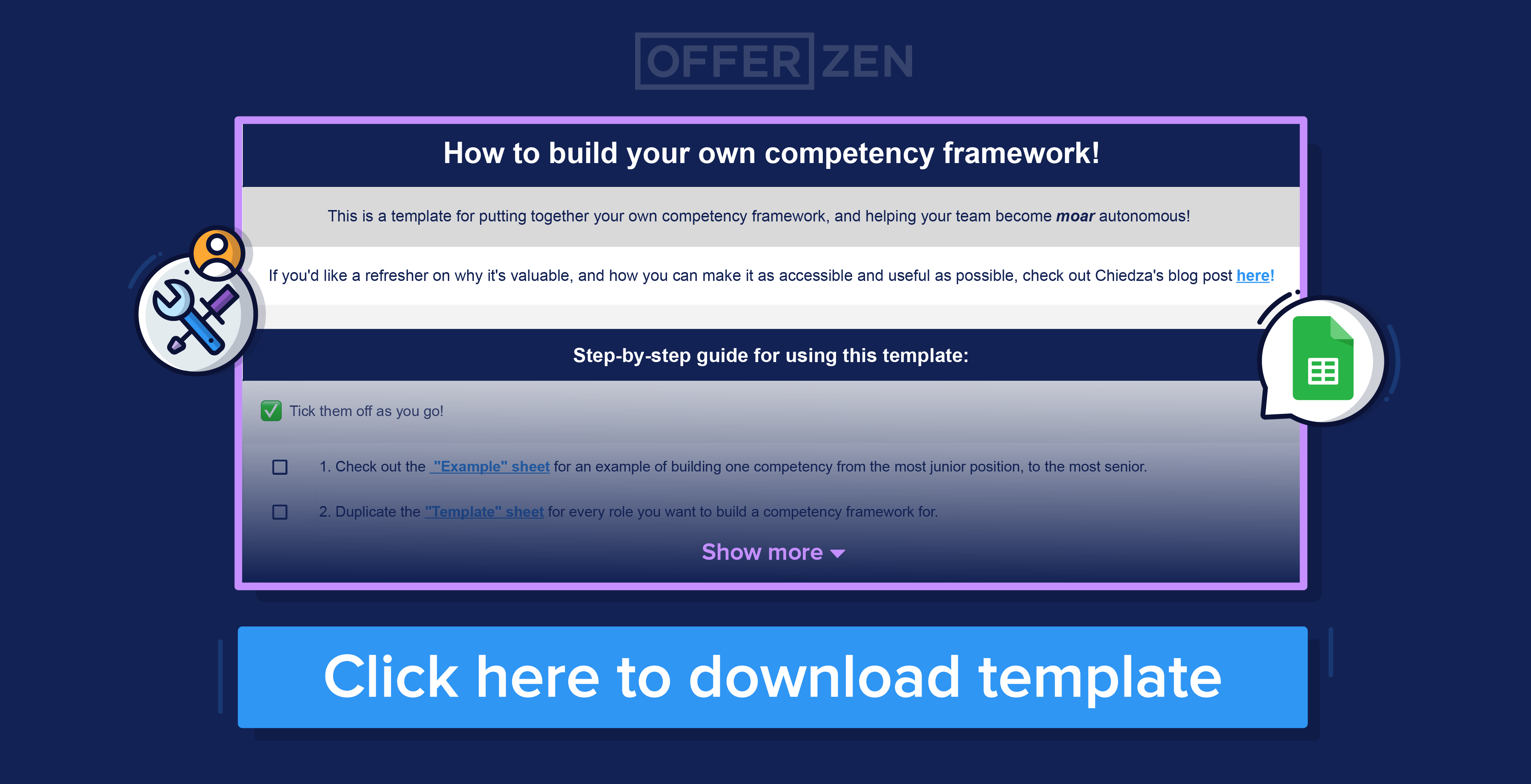 Competency framework: What it is, and how it helps

Very simply, a competency framework lists the various roles in an organisation, and the qualities or skills that each of those roles require someone to be good at. This then helps a leader build a succession plan for their team down the line. Chiedza describes it as follows.

“To me, it’s about identifying, nurturing, and developing up-and-coming leaders within an organisation by looking at who we have today, what stage they’re at, and who is showing signs and displaying competencies for being leaders in certain areas.”

This framework helps Chiedza build her succession plan in a few ways:

She has concrete data, instead of loose assumptions

Everyone has different ways of defining a job title, and different ideas of what it takes to get there. Instead of relying on those abstract, subjective ideas, Chiedza and her team work from a place of common understanding. This means that, if she needs to, she can use the framework to explain why she chose someone for a certain role, and avoid someone else in her team getting overly disappointed that they weren’t the person she picked.

Instead of assuming everyone wants to be a leader, Chiedza can guide her team towards their strengths and their passions: “I love opening people’s eyes to different roles”, she explains. “A lot of people feel like they have to manage people to go up in their career. But not everybody wants to manage people.” Having a competency framework lets her point to real ways in which someone can progress in the things that really excite them and that they’re good at: “If you want to become more technical, you can move towards product architecture; if you want to progress in product as an individual contributor, you can become a master of your craft.”

She knows that her team will be fine without her

Knowing which people in her team are best equipped with certain skills, as well as where they are working towards in their careers, makes it easier for Chiedza to know who could fulfil each of her responsibilities if she weren’t there. This lets her take time off from work with more confidence, and lets her know that, if she had to leave her position, her team would be fine without her.

How to make your competency framework more accessible to your team

Having a competency framework is great, but it was really important for Chiedza to actually make it useful and accessible to her team too, so that her team bought into the structure and used it. Here are two ways she got that right:

Collaborate on deciding which competencies to include

Setting up a competency framework can easily become a top-down process, where leaders tell their teams what they need to focus on in order to move up in their career. Chiedza, however, wanted to avoid this by including her team in the process.

When deciding which competencies she wanted to include, Chiedza started by looking at the roles and levels in her organisation, and defining seven competencies relevant to each one in a Google Sheet: “On one axis, we have the different role titles or levels, and then on the other axis we have seven competencies for each one — and, depending on the level, there are different requirements for each competency. For example, one of the competencies might be ‘management’, but management is not applicable until you get to a certain level for that role.”

From there, she shared it with her team and asked them for feedback on the competencies. This helped her break the framework down and open it up for discussion, instead of just telling her team to use it: “People need to understand how you came up with these competencies, and why they are the ones you’ve chosen,” she explains. “I think it’s quite overwhelming to just go straight in with this massive sheet of all this stuff. I share the competencies, we discuss them… and then I build out the final framework from there.”

Pro-tip: When choosing each role’s seven competencies, Chiedza recommends thinking about your specific context, as opposed to just using industry standards. Some of the questions that helped her include:

Use 1:1s and situational analysis to make it more accessible

Having the framework is only useful if you actually use it. That’s why Chiedza bakes it into her 1:1s, and uses situational analysis in order to make the competencies more “real” so that someone can action them in their day-to-day.

To get this right, she starts by understanding what each person wants from their career. Having that ‘North Star’ to work towards helps Chiedza support her team, by being more intentional about the roles and responsibilities they might want to take on one day:

“You have to be so intentional about what you want to do. You have to put someone in the right situations, with the right opportunities, so that they can shine and you can see they’re really growing in that area. Otherwise, they might just ‘sleepwalk’ into situations that might not actually be their strength or something they’re happy with.”

She starts that process by figuring out where someone sees themselves in the future, and whether their current role serves that or not. She says, “We start that discussion by asking: What do you see yourself doing in a few years? Then we talk about the projects they’re currently working on and say, ‘Is the project you’re working on going to give you enough to chew on to actually get a taste of what that role could give you?”

Chiedza keeps those answers in her notebook, and asks her team to bring two or three examples of situations to their 1:1s, that they found difficult or that they found easy. “Then”, she explains, “we unpack that: How did they conduct themselves? What was going on in the session? Could we have done things a little bit better? What I’m looking for is a thread of continuous improvement, and self-reflection.”

Doing this gives Chiedza a good idea of where someone’s strengths lie, and gives her team real life examples to work through and improve on.

“We’re not ‘just planning’ it. We’re making sure that they can manifest different situations, that I can see that they’re managing to cope with these things, and see whether I’m giving them opportunities to develop and grow the skills they need when they become leaders in their respective ways.”

Make sure to find Chiedza on LinkedIn if you have any more questions on building a succession plan or competency framework!