How investment and dilution works in startups

This is the second post in our Startup Equity in South Africa series. Please comment below to let us know what you’d like to see in the next one!

The first time I received investment I was totally lost and pretty scared. There was a huge sum of money at stake, and I didn’t have a clue what I was doing. The final documents from the investors totalled more than 150 pages of what seemed to me like indecipherably dense legalese.

I spent quite a number of late nights reading investment books, and trying to figure out this strange new world. Over time I began to realise that there were actually a few simple “first” principles that explained the world. Once I learnt to keep applying these first principles, the additional complex terms and long documents were much easier to grasp.

This post is about those simple first principles of investment. It explains the fundamentals of how shares, company valuations and investment are connected.

Real-world investment transactions can get pretty complicated, with huge amounts of details and complex terms. However, if you keep these basics in mind, you’ll have a pretty good basis for cutting through the complexity.

The basics of shares 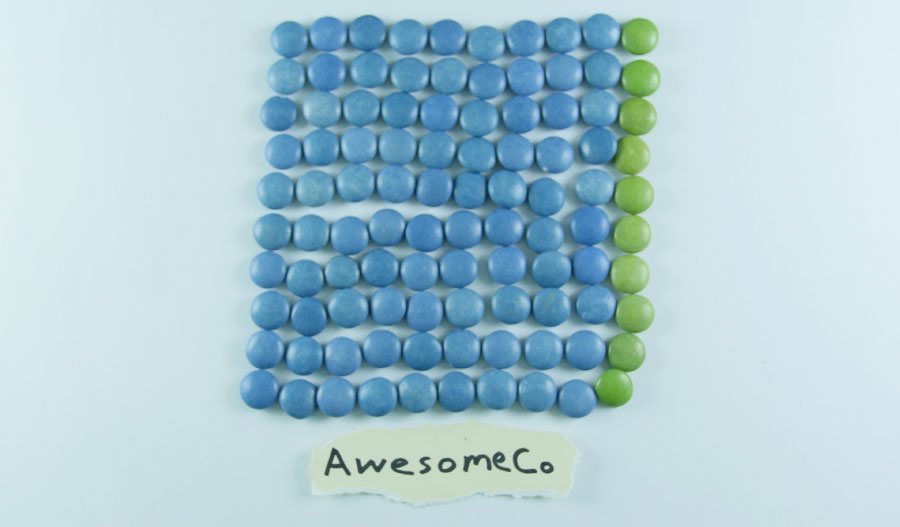 There are many types of shares, giving the owner different rights. For example: some shares let you vote on company matters, some are non-voting, some shares have preferred financial privileges, some have ordinary privileges. For starters we’ll be focusing on the simple case where all of the shares in a company are ordinary voting shares, let’s call it basic shareholding.

In a basic shareholding situation if you own 10 shares in “Awesome Company” with 100 shares in total, then you have a 10% vote and the right to 10% of all company income and own 10% of the company’s assets. If the company is ever sold, you’ll get 10% of the purchase price. 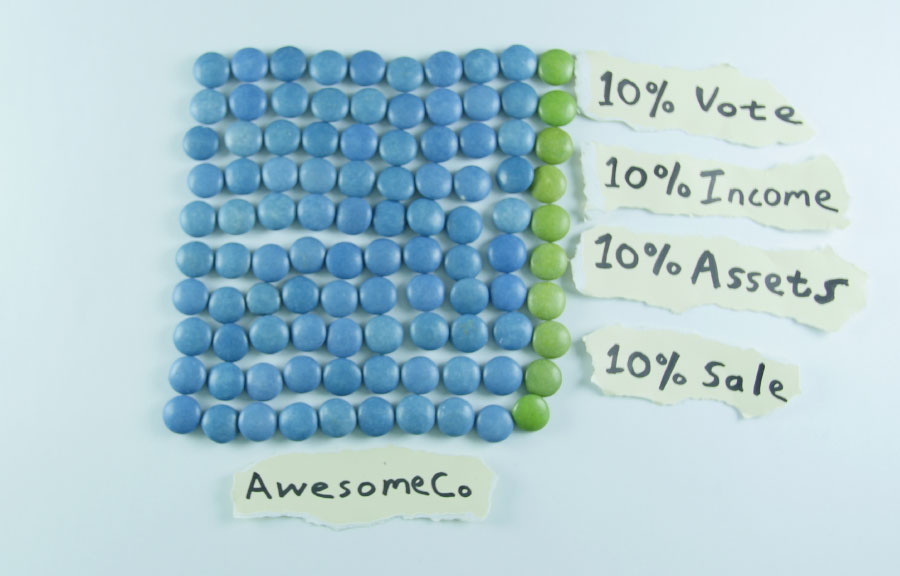 People don’t often buy an entire company. It is more common to buy and sell a portion of a company (in the form of a number of shares) than a whole company. In instances where individual shares are traded, like on the stock market, people generally use share transactions to determine the value of the company. The logic works as follows: if someone buys one share of a company for R10, and there are 100 shares, then we can say that the whole company is worth R1000.

Investment in a company means giving the company money in exchange for shares. The mechanics of investment aren’t always totally obvious, so we’ll start with explaining the basics.

The parties in an investment

To make it easier to understand investment, it helps to think about investment as also involving a third party, the company being invested in. The three parties are then:

The company receives the investor’s money, and gives shares to the investor. The existing shareholders approve the deal, but don’t actually receive money or give up shares (they do get diluted though, which is explained below).

Mechanics of an investment

The investor and the shareholders agree that the company is currently worth R1000 (i.e. each share is worth R10). This is generally called the pre-money valuation - sometimes VCs shorten it to just “pre”. The investor is going to invest R500, which means the investor should get: 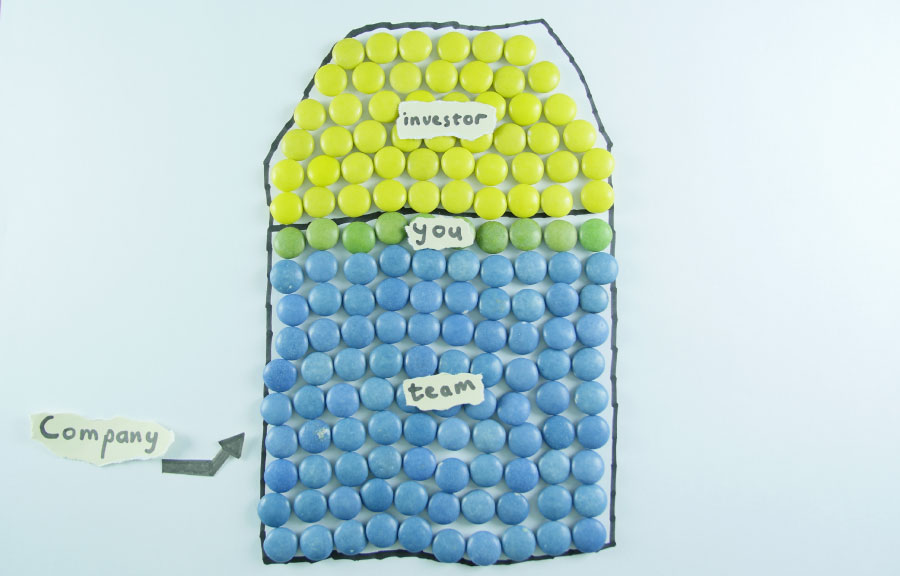 Dilution refers to the decrease in shareholding as new investors come on board. The shares of the existing shareholders don’t change, neither does the value of these shares. You still have 10 shares, valued at R10 each, for a total value of R100. What has however changed is your percentage holding of the company. 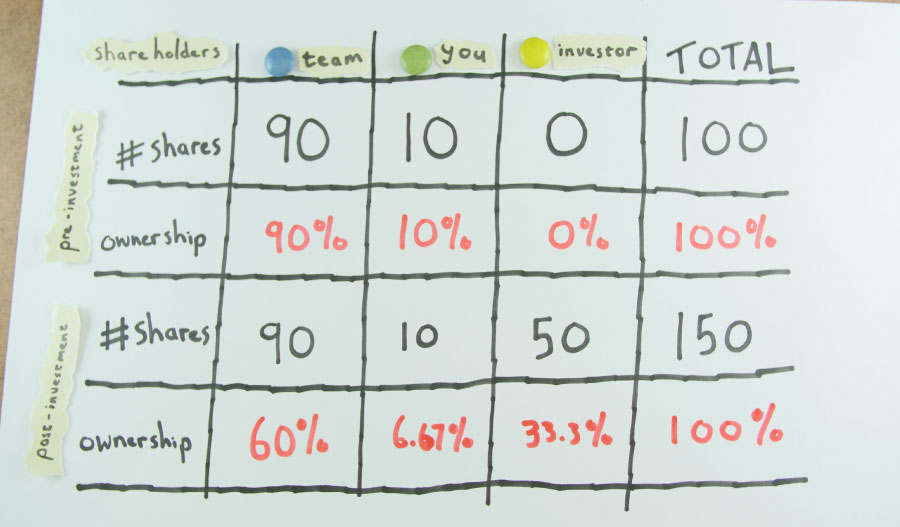 There are now 150 shares in total, so your percentage holding has changed. 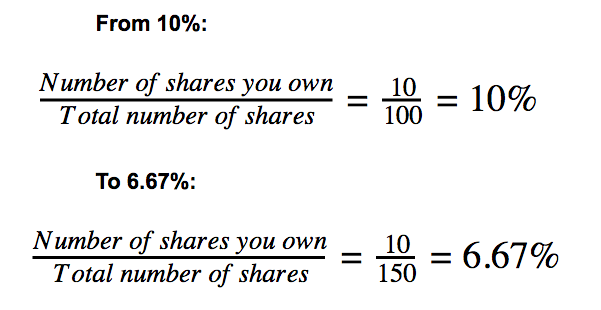 Venture Capitalists (VCs) will often summarise an investment deal by saying something like “I’m investing R5m at a R20m pre”. This means that they value the company at R20m before investment, and are investing R5m for a total post-money valuation of R25m. They will therefore expect to own 5/25 = 20% of the company after investment.

Note: It’s a common mistake to think the company is spending R5m to buy shares from the existing shareholders. With this view the investor would own 5/20 = 25% of the company, which is incorrect.

If you owned 10% of the company before investment, dilution will mean you’ll own:

Applying these principles to real-world situations##

Real investment deals tend to seem pretty far removed from our basic examples. VCs tend to add a lot of complex things like liquidation preferences, pre-money ESOP pools, convertible notes etc. In my experience however, a solid grasp of the basic principles of shareholding (plus Google) are enough to figure out the implications of these complex terms.

On more than one occasion I’ve seen experienced financial guys, exhausted from deal stress and many late nights, make mistakes on these basics. If you can keep the basics in mind, and use Google (and your lawyer) for the complex stuff, you can get very far.