How Games Benefit from UX Testing

The success of any game is highly dependent on how fun, engaging, challenging and balanced it is. Regular playtesting during development can help you to maximize these qualities. The tests must be carefully designed to find where things go wrong and how they can be improved. Here’s why user experience (UX) testing metrics are highly beneficial for this.

I’ve recently been the UX specialist for the development of an educational game. Geomax teaches geometry concepts to Grade 7 and 8 learners. Players collect objects, complete puzzles and avoid enemies while racing to the finish of each level.

We tested the game throughout to ensure that it was fun to play, engaging enough to be replayable, challenging enough to be interesting and not frustrating to learn. Designing new user tests for almost every sprint, I found that usability test metrics such as those defined by UX-giants the Nielsen Norman group applied well to game testing:

Let’s look at each of these in more detail.

In UX, learnability addresses how easily users discover the features of a product and learn how to use them. In a game, players should be able to discover and use the mechanics and control interfaces fairly easily and, of course, have fun while doing so.

It’s important that the initial discovery is fun and engaging, as it’s a player’s first experience of a game. This is where they decide whether it is worth playing.

For Geomax, we started testing the game with learners as early as possible to make sure that we got this right:

Testing learnability rigorously resulted in a game that players could pick up easily enough, had fun learning and that challenged players to think strategically.

Tip: Test mechanics and gameplay discoverability as early as possible. It is likely you will need a few iterations to get it right, so players enjoy the challenge and don’t find it too easy or difficult.

Common pitfall: If you test in groups, make sure the players can’t learn how to play from each other. While the social game is important, players will probably discover the game for the first time without the help of their friends. You must simulate this in your testing environment to really find out how learnable your game is.

In UX, error recovery refers to how many and how severe user errors are as well as how difficult they are to recover from. For example, navigating to the wrong page on a website is usually a minor error with easy recovery through using the Back button. In games, players learn by making errors. Examples from Geomax include forgetting to pick up items they need later or moving too close to enemy objects so they are attacked and lose items they have collected.

In order for the players to keep their interest in the game, the consequences shouldn’t be too damaging. They must be able to work out how to recover and avoid the error on their own.

While learners played Geomax, we checked whether errors resulted in good or bad frustration:

Whenever we saw bad frustration, we knew we needed to adjust the environment or interactions. For example, simplify or space out enemies, or shorten the path to lost items. This resulted in a game that players would not abandon because it was too grinding or difficult.

Tip: If your levels are short enough, players don’t have to be able to recover from errors. They should just be able to see how to avoid them when they replay the level.

Common pitfall: Don’t remove all frustration so the game becomes too easy. Unlike with other products, it is important that there is some challenge in a game to keep players interested!

In UX, efficiency refers to how fast and accurately users can perform tasks with an interface once they know it. The point of games is of course not to complete them as efficiently as possible.

However, players must be able to improve and feel that their skills are progressing so they can beat the game or each other if they play hard enough.

We tested for Geomax’ efficiency per mechanic and overall:

This ensured that we created a balanced game that remained compelling and engaging as players improved and gave them pleasure at developing their skills.

Tip: Remember to focus on both individual elements and the overall structure of the game. Game environments, objects and mechanics interact during play. This changes how each is perceived by players and can impact discoverability and difficulty.

Common pitfall: Do not be rigid about the structure and organisation of levels and mechanics. Balancing a game is a difficult, delicate and ongoing activity. Even towards the end of development, you may want to move or even remove levels, elements and mechanics of the game to create a well-balanced game. 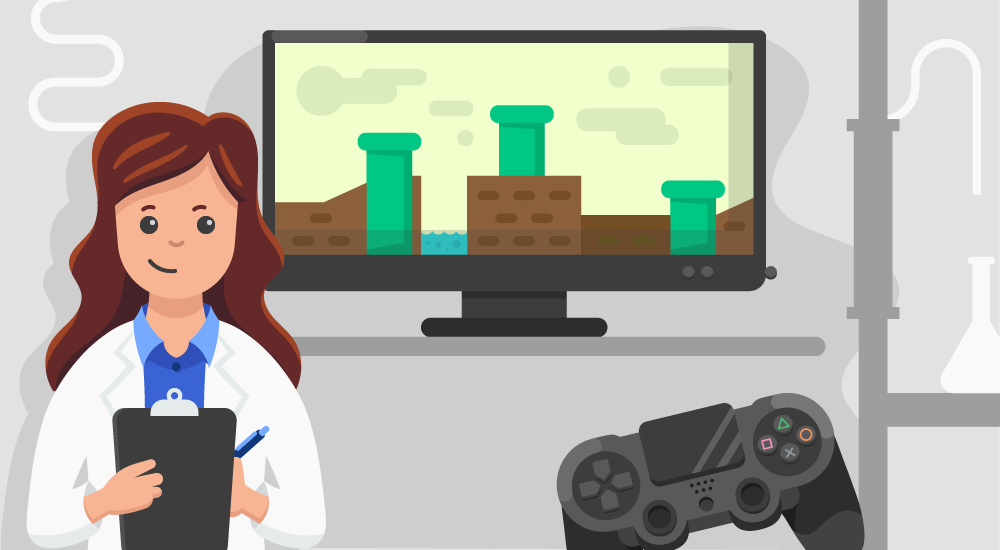 Satisfaction -unsurprisingly- refers to how pleased users are with their experience using a product. This is tied into whether they can achieve their aims easily and successfully. It also refers to the amount of delight and pleasure an interface gives the user. Games are all about fun and challenge, so satisfaction is very important.

In addition to compelling gameplay, social engagement and appropriate rewards, the narrative and game art should be inspiring and attractive.

We tested for satisfaction in various ways at different points of development:

As well as asking about game details, we observed players for signs of enjoyment, for example:

As designers, we then focussed on what worked for players and enhanced those elements. Where players showed less satisfaction with the way a particular element or mechanic worked, we fine-tuned it by changing its location and increasing or decreasing the challenge. We also looked at overall game balance and changed the way levels were ordered to improve it.

Tip: Just asking about satisfaction rarely yields good results, because test participants tend to want to please the tester and game players are no different. Focus more on observing player reactions and behaviour than on asking about satisfaction. If you do ask, make sure you get detailed responses and reasons rather than yes or no answers. You can use the details to judge how satisfied players really are.

Common pitfall: Do not ask testers whether they would buy this game when it is released and how much they would pay for it. The results will not be accurate. Players may be excited about the game now, because they have been playing it with friends, and you have likely paid them to do so. They cannot know how they will feel in the future, when they must pay and play in their own time.

Memorability is about how easy it is to return to a piece of software after a while and still know how to use it. In games, the situation is a little more complicated. Players should retain their expertise when they haven’t played for a short time, but they shouldn’t be able to jump into higher levels and play expertly without practice.

Players build up skills in games. If these are too easy to pick up, or disappear too quickly without ongoing practice, they may seem trivial or not worth the time spent building them up.

We tested Geomax with repeated groups of learners to ensure that the controls and mechanics were memorable. We observed how long it took them to reorient themselves and modified elements that prevented them from jumping back into the game easily.

We also worked constantly on the game balance. Higher levels needed to be complex and difficult enough that players felt challenged when they returned to the game after a time gap. Behaviour that we observed to support this included:

This ensured that after gaps of two weeks to a month, players would be interested in picking up the game again, and were encouraged rather than discouraged from playing after an absence.

Tip: Game interface elements like movement controls, buttons and menus should not hinder play in any way. It is very important that these are intuitive and easy to remember, so that players can just focus on their game expertise, rather than trying to remember how to Pause a game, for instance.

Cara Winterbottom is a UX consultant and author who has trained extensively in both Psychology and Computing and has a passion for both. The skills and knowledge that she has learned in these areas are powerful tools that she brings to bear on her user experience and software design work.