The way you treat people can make or break your hiring process - sounds like a no-brainer, doesn’t it? But here’s the thing: Hiring is hard and communication isn’t always quite as straight-forward as we think. That’s why we made it the focus of this video. 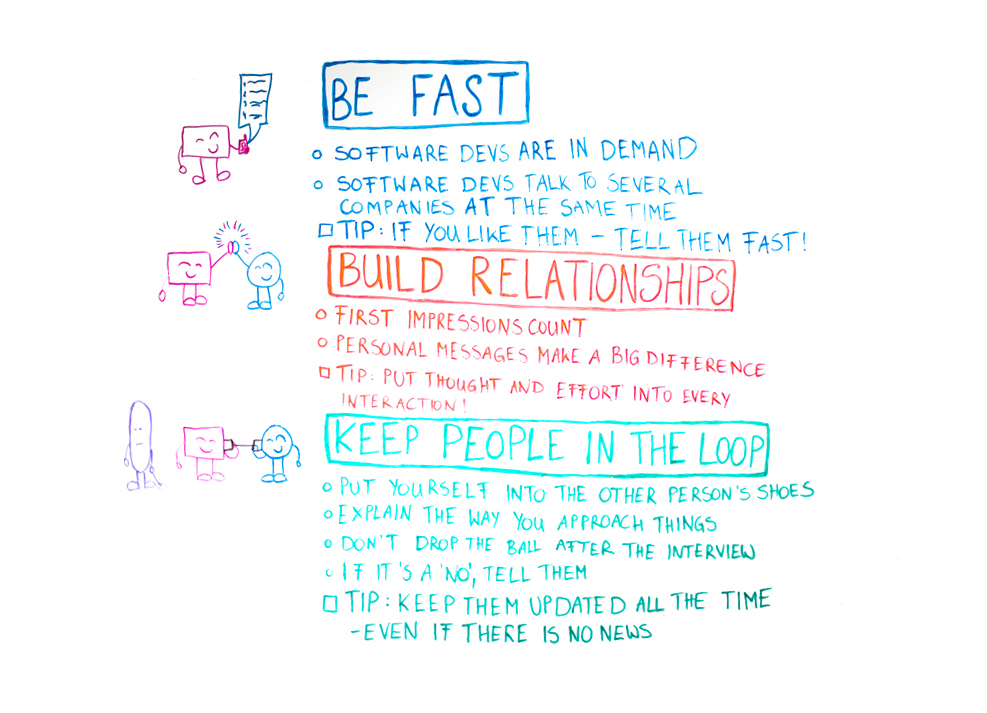 As a hiring manager, you should always make sure to have the three basics of good communication covered:

Why is this so important? Let’s have a look.

The first element I want to talk about when it comes to communicating during a hiring process is being fast.

The reality is that software developers are in high demand. That means: If you’re a dev looking for a new job, you could be off the market again within two to three weeks.

Bearing that in mind, as a company, if you are really excited about someone, chances are that ten other companies are excited about that dev as well.

Remember that we live in a time of Whatsapp and instant messaging. People are used to prompt replies. You want to be that company that gets its foot in the door early, giving the developer a rapid response. That’s ultimately my first tip:

Now that you have a foot in the door with the dev, the next step is to start building a relationship. The thing to bear in mind here is that the way you communicate is going to go a long way to create a good first impression. That matters because the dev often has nothing but your website and the way you talk to them to form an opinion of your company.

Think of the following example. If I said to you:

The second example is obviously better. Personal messages make a difference. So here’s the tip:

Put thought and effort into every engagement.

Keep people in the loop

Throughout this process, you want to make sure that people are kept in the loop. Remember, you know what your hiring process is, but the dev doesn’t necessarily know that.

Make sure they know who they are going to speak to in the next interview, or what the purpose of a specific meeting is. If you’re giving them a tech assessment, let them know what the outcomes are and when the deadline is.

All of this is going to go a long way to make sure that the dev is adequately prepared and it’s not going to compromise your hiring process! You can still throw them a couple of curveballs in the interview. Ultimately, you want to be testing people on their strengths. If they have put a lot of effort into preparing, that’s a good thing!

Once you’ve had the interview, let them know when you are going to get back to them. And if you don’t actually have feedback by then, reach out to them none the less. We have a saying here at OfferZen: No news is news. Just tell them you’re still considering them and that, for example, you’re still waiting for internal approval before you can proceed.

And - if it is a ‘no’, just tell them as well! Some companies tend to sit on their hands at this step but you really need to explicitly close the loop here.

Keep people updated all the time. Keep them in the loop.

Combining that with being fast and building relationships in your communication, is going to go a long way in finding that unicorn, full-stack developer that you are looking for.